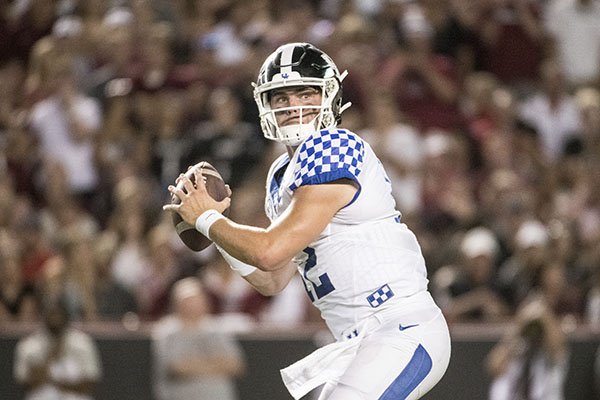 Kentucky Coach Mark Stoops said he's not sure who will start at quarterback for the Wildcats when they play the University of Arkansas on Oct. 12 after both teams have an open date Saturday.

"I think it's up in the air," Stoops said on Wednesday's SEC teleconference.

Sawyer Smith, a junior graduate transfer from Troy, has started Kentucky's three SEC games when the Wildcats have lost to No. 10 Florida at home, and at Mississippi State and South Carolina. Smith also has been affected by shoulder and ankle injuries and was replaced by Lynn Bowden -- a wide receiver and kick returner -- late in South Carolina's 24-7 victory over Kentucky.

"Sawyer has been battling through some injuries for a couple of weeks," Stoops said. "That got aggravated again this past Saturday."

Taking snaps out of the Wildcat formation, Bowden led Kentucky on a five-play, 84-yard drive on its final possession against the Gamecocks. The junior's final stats included 2-of-2 passing for 7 yards, 6 carries for 44 yards, and 3 receptions for 18 yards.

"Lynn played a lot of quarterback in high school, so he's used to having the ball in his hands," Stoops said. "He can throw the ball. Lynn's a very bright guy. He can pick up things very easily.

"Obviously, the fundamentals of the quarterback position, he's going to do it with athleticism alone for the most part, but he's good with his reads. With the run game, the run-pass options and things of that nature."

While Smith is recovering, Bowden and sophomore Walker Wood are getting snaps.

"We do anticipate and hope that Sawyer will be back in action here next week ready to play against Arkansas," Stoops said.

Not a good look

Things aren't going well for Tennessee Coach Jeremy Pruitt on or off the field.

The Vols are 1-3 -- including a home loss to Georgia State to open the season -- and figure to get crushed at No. 3 Georgia on Saturday.

But what Georgia does to the Vols may not be the worst thing that Pruitt endures this week.

An embarrassing exchange between Pruitt and UT police regarding the arrest of Tennessee linebacker Jeremy Banks was recorded and released to the Knoxville News-Sentinel and other media.

The arrest details weren't reported until this week.

Banks was arrested at 3:45 a.m. on Sept. 15 -- about 12 hours after he had two interceptions in the Vols' 45-0 victory over Tennessee-Chattanooga --and Pruitt sounded as if he was questioning the police's reason for the arrest and indicating it wouldn't have happened where he coached previously, which includes Florida State, Georgia and Alabama.

Banks was stopped for making an illegal U-turn and then arrested after officers learned a warrant had been issued Aug. 21 for Banks failing to appear in court for a citation of driving with a suspended license.

"Why do you have to arrest him?" said Pruitt, according to the audio obtained by the News-Sentinel. "'Just because he has a warrant?"

The officer told Pruitt the warrant meant he was legally obligated to arrest Banks.

"This is the silliest s*** I've ever seen in my life," Pruitt responded. "I've worked at four places, and I ain't ever had no crap like this except for here."

Later Pruitt said: "Go ahead. Do your civic duty, man."

Pruitt also contradicted what he implied about police giving players a break regarding arrests at his previous coaching stops.

"There's no place I've coached that anybody has cut anybody a break," Pruitt said. "The point was, the warrant was issued ... and I wasn't aware of it, and that's something that we've got to do a better job to focus on our players so you don't have a speeding ticket or anything that turns into something like this.

"When you get a phone call at 3:30 in the morning, you're always going to take it. To be honest, when I got the phone call, I had no idea who I was talking to, probably for the first two minutes. By the time I got it figured out, there was obviously some confusion, because it was late, but I appreciate the officer talking to me and doing his job."

Banks, a sophomore reserve for the Vols, made several disrespectful comments to the officers that were recorded.

Banks also made comments to a a woman who was with the officers as part of a ride-along program.

"Ma'am, I don't think you want to be an intern, because where I'm from, we shoot at cops," Banks said. "I'm from Memphis."

Banks issued a statement Tuesday apologizing to his family, the law enforcement community and UT for his comments through the UT athletic department.

Considering what Pruitt was recorded saying, he probably should have issued an apology as well.

Auburn Coach Gus Malzahn is in his 11th season in the SEC, but Saturday's game between the No. 7 Tigers and No. 10 Florida will be his first game at the Swamp, the nickname for Florida's Ben Hill-Griffin Stadium.

Malzahn faced Florida in his only season as Arkansas' offensive coordinator in 2006 when the Gators beat the Razorbacks 38-28 in the SEC Championship Game in Atlanta.

The only other time Malzahn has faced Florida was in 2011, when he was Auburn's offensive coordinator and the Tigers beat the Gators 17-6 in Jordan-Hare Stadium.

That game was the last time Auburn and Florida have played prior to Saturday's matchup. The teams haven't played in Gainesville, Fla., since 2007, when Auburn won 20-17.

"I've heard great things about playing there," Malzahn said on Wednesday's SEC coaches teleconference. "The challenge of the Swamp and how loud it is and everything that goes with it.

"Then when you add the fact it's two top 10 teams playing on CBS, I think that makes it even better. We're expecting a great atmosphere, and I'm sure it will be a challenge."

Malzahn, who is in his seventh season as Auburn's coach after being the offensive coordinator for three seasons, has coached in every SEC stadium except the Swamp.

Alabama, which was ranked second to Clemson in The Associated Press poll, moved ahead of the Tigers to the No. 1 spot this week.

Voters were less than impressed by Clemson hanging on to beat North Carolina 21-20 -- when the Tar Heels couldn't convert a two-point conversion late in the game -- and they moved the Crimson Tide ahead of the Tigers when Alabama won 59-31 at Mississippi.

"I guess a win is a win," Saban said after the game. "We did some very good things out there today, but we also didn't play some things very well.

Lisa Pritchard, a veterinarian technician and Bully's handler, said she checked on him after the hit. She also did a video chat with the dog's primary veterinarian to make sure Bully wasn't injured.

"I've been doing this for 27 years," Pritchard told CNN. "And this is the first time I've had any problems whatsoever."

It's not the first time an Auburn player had a sideline issue with a bulldog mascot. In 1996, Auburn receiver Robert Baker was nearly bitten by Uga -- Georgia's bulldog mascot -- after making a touchdown catch.

2;(2);Georgia;4-0;Shouldn't be challenged at Tennessee

8;(7);Mississippi State;3-2;Open date after being dominated at Auburn

Florida junior quarterback Kyle Trask has been impressive taking over as the Gators' starter with the loss of Feleipe Franks to a season-ending ankle injury against Kentucky.

Trask has completed 51 of 66 passes (77.3%) for 647 yards and 5 touchdowns with 2 interceptions, but he'll face his toughest challenge when Florida plays Auburn on Saturday in the Swamp.

Auburn is holding opponents to 95.2 rushing yards per game, and Florida is averaging 141.5 rushing yards, which means Trask will need to make plays in the passing game.

It’s a light week in the SEC with three conference games, but it figures to be hot and heavy in the Swamp on Saturday when the Tigers play at Florida for the first time since 2007. Auburn-Florida not only is the SEC’s marquee matchup but it’s also the only game nationally with two top 10 teams. Florida’s defense has 24 sacks and figures to try to rattle Auburn freshman quarterback Bo Nix. Auburn is favored by three points.

No. 3 Georgia at Tennessee

"I'm not as bored, I'll tell you that. I got bored the last couple of years."

"I think the program he took over won 20 games in its previous two years. That helped."