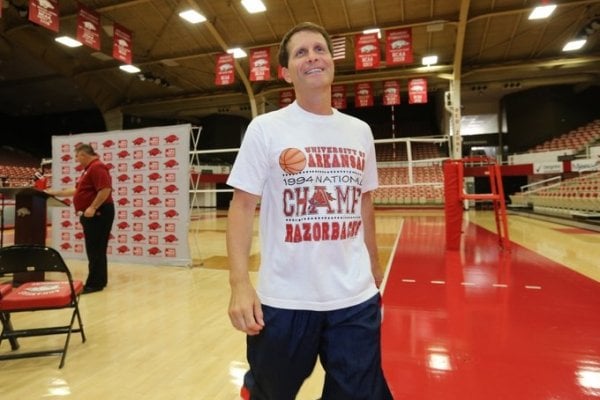 Arkansas men's basketball coach Eric Musselman exits a news conference on the floor at Barnhill Arena in Fayetteville on Thursday. On Wednesday, the program announced it would play its annual preseason Red-White scrimmage in Barnhill Arena on Oct. 5 and 3 p.m.

The Arkansas Razorbacks are playing their Red-White intrasquad game at 3 p.m. in the venue they called home for 36 years from 1958-93.

ADMISSION Free. Doors open at 1:30 p.m. Seating is on a first-come, first-served basis

PARKING Free. Suggested lots are 44 in front of the Broyles Center and any lot west of Razorback Stadium. ADA parking is available for those with a state-issued ADA hangtag in Lots 59 and 67. These lots are accessible from Meadow Street. ADA drop-off is also available in that location for those without a hangtag.

POSTGAME AUTOGRAPHS The Razorbacks will have a postgame autograph session in the Walker Pavilion, which is the football team’s indoor practice field.

Everything is fine with Walton Arena, where the University of Arkansas has played its games since the 1993-94 season.

New Razorbacks Coach Eric Musselman and the UA athletic department administrators decided it would help create interest for the Red-White game to play it in Barnhill Arena.

"I think it's going to be an awesome environment," Musselman said. "It seems like there's a lot of excitement about being in Barnhill. I think it'll be a fun afternoon."

Joe Kleine, an All-American center as an Arkansas senior in 1985 who played in the NBA for 15 seasons, said he'll be at today's game and is bringing his grandchildren, Danny and JoJo.

"I want them to see where Pops played," Kleine said. "I think it's a fantastic idea to play back in Barnhill.

"A lot of times those Red-White games can be kind of mundane. I think this is a great way to spice it up and put some added excitement into it."

Admission is free, and Musselman is hopeful of drawing a big crowd to the 9,000-seat venue that now serves as the home for the Razorbacks' volleyball and gymnastics teams.

"Having this game is a great tribute to past teams and some great games that were played in Barnhill," said U.S. Reed, who played guard for the Razorbacks from 1978-81. "It's going to bring back some great memories for the players and the fans. I think people will get a big kick out of seeing a game in there."

University of Arkansas at Little Rock basketball Coach Darrell Walker, an All-American guard at Arkansas as a senior in 1983, has known Musselman for several years from their time together in the NBA. Walker played and coached in the NBA, and Musselman was an NBA coach.

"I know the Muss man, and he gets it," Walker said. "He gets the tradition at Arkansas. He understands the connection of Barnhill and Bud Walton, and that there was a Barnhill before there was a Bud Walton.

"Some people might not have known about that or have forgotten that, so I'm happy he's doing this."

Ron Brewer, a Razorbacks All-American guard as a senior in 1978 who played in the NBA, said it's wonderful to see Barnhill Arena playing host to a basketball game for the first time in more than 25 years.

"The Barnhill crowd was so rabid," Brewer said. "The home-court advantage was worth 10 to 15 points.

"When we played there and were winning, you couldn't hear anything because it was so loud. It was fun for us, but can you imagine what the opposing team was going through?"

Arkansas had a 304-94 record in Barnhill Arena, including 199-23 in 19 seasons under coaches Eddie Sutton and Nolan Richardson.

"I love Bud Walton Arena, but Barnhill is always going to be my place," Walker said. "I'm not saying that Bud Walton isn't special. But Barnhill was an unbelievable place to play."

The Red and White teams have been named in honor of Sutton and Richardson.

"It's going to be good for our guys to play in front of the fans for the first time this year," Musselman said. "It breaks up the monotony of training camp.

"I think it will be fun for the players, but it's also important to help us get ready for the season. We're going to go back and evaluate the film and treat it like an exhibition game for sure."

Kleine said being back in Barnhill Arena to watch a game will bring back a lot of fond memories.

"Barnhill was always rocking, man," Kleine said. "I played in a ton of basketball arenas, and I never walked into one and said, 'This reminds me of Barnhill.'

"Because there was absolutely no other place like it. There's no way anybody can ever say that another place was louder or more raucous than Barnhill."