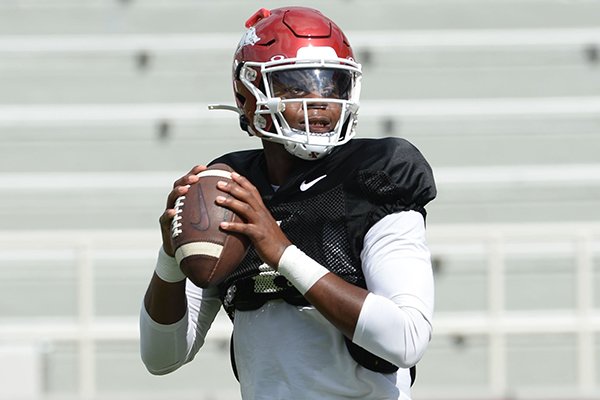 FAYETTEVILLE — Arkansas has used a number of freshmen in prominent roles this season.

Receivers Trey Knox and Treylon Burks, offensive lineman Ricky Stromberg, defensive end Mataio Soli and nickel back Greg Brooks Jr. are all starters, and others such as defensive ends Zach Williams and Collin Clay are part of playing rotations.

But as Arkansas enters its sixth game week of the 2019 season, some of the Razorbacks’ most high-profile signees from the past year have either yet to play in a game or are still in line to potentially redshirt.

Among the notables that haven’t played yet are quarterback K.J. Jefferson, tight end Hudson Henry, running back A’Montae Spivey and defensive end Eric Gregory. Jalen Catalon, a highly-recruited defensive back from Texas, has played in only one game.

The Razorbacks’ open date allowed coaches to work more with some of those freshmen last week than they are able to during game weeks. Arkansas coach Chad Morris said there are “a few” freshmen who haven’t played much or at all who could factor more into upcoming game plans, and mentioned Catalon and defensive back Malik Chavis as candidates for additional playing time.

“Catalon is a guy that’s a playmaker. You look at him in the scrimmages where he was the same way, but he’s a guy when he’s out there in practice he can find the ball, he can get to the ball and he can certainly make plays.

“We’re going to keep pushing the envelope and make sure we’ve got our best players on the field. Certainly those two have a chance to get there. We’ve got to continue to build depth and that’s part of it.”

Morris indicated Gregory could also see the field on defense. Gregory is fully healed from an ankle injury suffered in the preseason that required surgery.

“Because he’s not ready right now doesn’t mean he won’t be ready in the next several weeks,” Morris said.

The bye week provided offensive coordinator Joe Craddock an opportunity to work extensively with Jefferson, a dual-threat quarterback from Mississippi who was offered by a who’s who of colleges.

“I thought he took a big step last week, honestly, getting some reps in (skeleton), getting some reps in team,” Craddock said. “He did some good things with his legs as well as sitting in the pocket and throwing the ball. He’s just got to continue to learn mentally. He’s a very smart, sharp kid, but it’s just about doing it and repping it, and he’s got to know it in the meeting rooms…and take it out on the practice field, and go do it.”

Craddock said he is encouraged by Jefferson already knowing “what I’m going to say before I say it, so that tells me that he’s on the right track and he’s really learning. It’s about learning and getting better at it.”

Jefferson has shown flashes of strong play in practice, but has also struggled with passing accuracy. Craddock said he has worked with Jefferson on his posture in the pocket, where Jefferson has a tendency to bend his hips instead of his knees.

“There are things in his motion that need to be cleaned up — not really fixed, but cleaned up that will make him more accurate,” Craddock said. “A lot of playing quarterback is with your feet. With a lot of people that’s a big misunderstanding, that it’s about your upper body, but it’s really about getting your feet in the position that if your feet are in the right place, your hips are open and you’re able to throw the ball in the right place — especially in the right place when you’re throwing the ball to your left. That’s something we’ve really worked on with him.”

Like Jefferson, Henry was a heralded recruit out of Pulaski Academy, with at least one publication ranking him the nation’s best high school player at his position. Henry missed some time in the preseason while in concussion protocol and has yet to play this season.

Craddock said he would like to see more confidence from Henry.

“He’s a good player, he’s just young and understanding that you can do this, you can block those guys, you can run routes against man coverage or win on a linebacker, or whatever,” Craddock said. “He’s really getting better and getting a little more confident in himself when it comes to those things.”

Other freshmen on offense who Craddock said could see their first playing time or additional playing time are Spivey, offensive lineman Brady Latham and Beaux Limmer, and receiver TQ Jackson.

“There are a lot of exciting young guys,” Craddock said. “They’re freshmen in the SEC and it’s tough to do what Treylon and Trey are doing, and even Ricky. Those guys are going to be good players. They’ve got to continue to develop.”

With six of the remaining seven games against SEC opponents, in how many games can Arkansas afford to play inexperienced players? Freshmen can play in up to four games without burning a redshirt, but the Razorbacks’ nonconference games against Portland State, Colorado State and San Jose State were all up for grabs in the fourth quarter, eliminating the possibility of four-game redshirts to see the field.

“As far as what the schedule looks like and whether these guys are going to play or not is not really relevant,” Morris said. “It’s more of how our football team is doing, whether we’ve got the injuries that allow the depth. We need guys on the field. I think you very well could see a few more younger guys get in. I know they’ve been getting a lot of reps in practice. The game dicates that…but I anticipate some guys being able to continue to come on.”