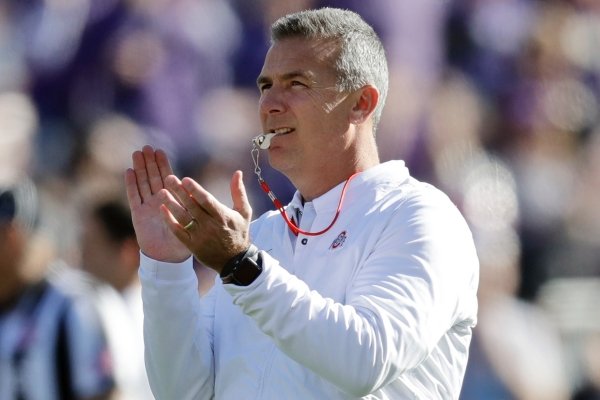 Urban Meyer did everything expected of the guest speaker at the Little Rock Touchdown Club's weekly luncheon on Monday.

Meyer, 55, touched on a variety of subjects at the DoubleTree Hotel in Little Rock, including a lively account of Florida's come-from-behind victory over Arkansas in the 2006 SEC Championship Game at the Georgia Dome in Atlanta.

Meyer talked about his respect for Arkansas football, especially during the days of Frank Broyles, and said he still can't think of the Razorbacks as anything other than a Top 10 program.

The 2019 season is the first in more than 30 years that Meyer is not coaching in college football.

Meyer started a 17-year run as a head coach at Bowling Green in 2001, followed by stints at Utah, Florida and most recently Ohio State, where he ended his tenure in January with a victory over Washington in the Rose Bowl.

That victory left Meyer's overall record as a head coach at 187-32, a winning percentage of .853, one that trails only the all-time legends of the game, Notre Dame's Knute Rockne and Frank Leahy.

Meyer talked about the importance of recruiting, the best way to prepare teams for big games and how momentum and injuries play a vital role in success.

The subject of player arrests at Florida was asked and answered, with Meyer saying the Gators averaged about four arrests a year during his 7-year stay.

"We weren't the most in the SEC with arrests, but we had some," he said. "Is one more than enough? Yes. We're not going to throw them to the curb. We're going to try and help them."

One new deal that Meyer is having trouble adjusting to is the NCAA's transfer portal, where unhappy players can advertise their willingness to transfer.

"That gives me a chill down my spine," he said. "But the game has changed."

One thing that will not change is Meyer's name being mentioned for every potential big-time opening in college football.

"Mark May is not in my inner circle," he said, sending Touchdown Club members roaring.

Meyer, not known for his glibness, made the audience laugh on more than occasion, regaling them in stories about how he was gone from home so often early in his career as a Colorado State assistant that one of his young daughters once asked Meyer's wife, Shelly, if that was Daddy sleeping in the bed.

There was also the back story to Florida's matchup with Arkansas in the 2006 SEC title game.

Meyer talked about how one of his mentors, former Ohio State Coach Earle Bruce, armed Meyer with some important advice when Meyer told Bruce before the game he wasn't doing well and didn't know how he was going to coach the game.

Meyer said he wrote down Bruce's motivational advice at the bottom of his play sheet.

Meyer said Bruce's message led him to calling a fake punt on 4th-and-10 from the Florida 10 after Arkansas scored 21 consecutive points to take a 21-17 lead.

It worked: Florida came back to win 38-28, earned a spot in the BCS Championship game against Ohio State, and ended up winning the first of Meyer's three national championships.

Meyer will go down as one of college football's all-time most successful coaches, even if he never coaches again.

But the lure of the Notre Dame job seemingly stands above all for Meyer, a devout Catholic who grew up a Notre Dame fan and was an assistant there for five years under Lou Holtz and Bob Davie before taking the Bowling Green job in 2001.

Meyer, after smiling and taking pictures with more than 50 club members, and then taking another photo with Broyles Award trophy, went from jovial to terse in a matter of seconds when a reporter asked about the possibility of him completing his resume, someday, as head coach at Notre Dame.

"We're just talking about Arkansas," Meyer said, not listening to the entire question. "Thanks."