Starkel looking forward to bouncing back at Kentucky 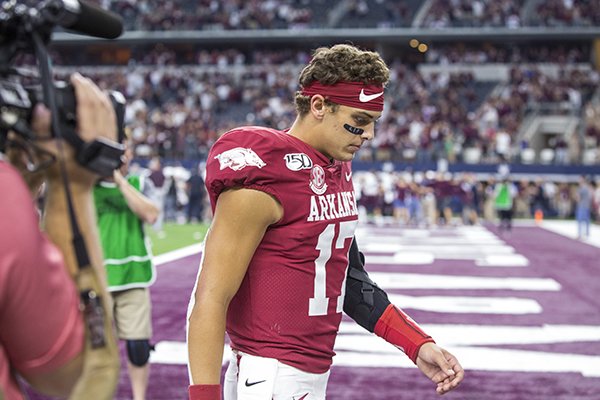 FAYETTEVILLE — Arkansas quarterback Nick Starkel met with the media Tuesday for the first time since suffering an elbow injury in the first half of a loss to Texas A&M on Sept. 28.

Starkel suffered the injury after being intercepted by Justin Madubuike and while tackling the 6-3, 304-pound defensive lineman.

“The biggest takeaway from that play probably would be just don't throw to other team,” Starkel said. “We can talk about tackling all we want, but I shouldn't have to be making a tackle. I shouldn't be making that mistake. That's on me. That's me making a bad play worse in my opinion. That's something I've got to get better at.”

Starkel has completed 62 percent of his passes (81 of 131) this season for 1,019 yards with 7 touchdown passes and 7 interceptions. Five of his interceptions were thrown in one game against San Jose State and three of the interceptions have been near the end zone when he had his team poised to score.

“That's just something we've been stressing this whole week,” Starkel said. “Coaches have been stressing and they've been on me. I'm my hardest critic. I'm not gonna let them be any harder on me than I am on myself. I know that's on me.”

The interception on which he got injured occurred on a play where Starkel was supposed to get a shovel pass to running back Rakeem Boyd, who was knocked down on the play.

Starkel’s elbow has healed and he will be the starter for the fourth straight game when Arkansas visits Kentucky on Saturday for a 6:30 p.m. game.

The Razorbacks and Wildcats have not met since Arkansas defeated Kentucky 49-7 on Oct. 13, 2012.

“It's doing a lot better,” Starkel said. “Got all my strength back. Throwing the football around. Feeling good out there.”

All of his tight ends are healthy, led by Cheynne "C.J." O’Grady, and all of the running backs are good to go with Chase Hayden and TJ Hammonds on hand to back up Boyd and Devwah Whaley.

“That's awesome,” Starkel said. “That's huge for us all those young guys being healthy. Getting C.J. and everybody back out there. TJ Hammonds, I know he got to play a little bit last game at A&M. That has been an awesome addition. He brings some fire and energy. Obviously having Treylon and Trey back is huge and C.J. The receiving corp we feel great (about this week).”

Knox and Burks have each missed one of the last three games so Starkel is anxious to have them back out on the field together.

“It really opens it up,” Starkel said. “You can see those guys make the safeties kind of respect them and respect the vertical pass game a lot more. But even when they’re out, we had guys like (Morris) making plays in the middle of the field, bouncing off guys, breaking tackles and stuff like that. So when you get Treylon though, you get some real speed out there. So having that is huge. Teams definitely respect that I feel.”

While most of Arkansas current players have never played Kentucky, Starkel is preparing for them for a second straight season after playing them at Texas A&M last season.

The Aggies defeated the Wildcats 20-14 in overtime in College Station, Texas.

“(Texas A&M tailback) Trayveon (Williams) had the up and over touchdown," Starkel said of the game-winning score. "It was pretty fun.”

While star defender Josh Allen is now in the NFL and others are gone from Kentucky, the Wildcats still have some formidable players.

“They're a big defense,” Starkel said. “If you look at just pure numbers-wise, they're big up front. I think they've got two 360-plus guys. They've got some big defensive ends and that's a lot up front.

Starkel is trying to remain on an even keel heading into Saturday’s game with the Wildcats.

“I think that it’s - you know - never make a game bigger than it is is kind of my mantra, my mentality,” Starkel said. “I was really preaching that against A&M was, ‘Hey, don’t make this game bigger than it is.’ That’s kind of what I’m sticking with. But honestly I think it’s fun that we’re going to play at a team’s place that we’ve never played at. They’re going to have a lot of their fans there. We travel well, but they’re gonna have home field advantage.

“We take that as we’ve got to bring our own energy. We’ve got to create our own plays. Nobody’s going to go out there and bring some other energy for us. So it’s really about us when we go to a place like that, especially at night. We’re excited about that.”