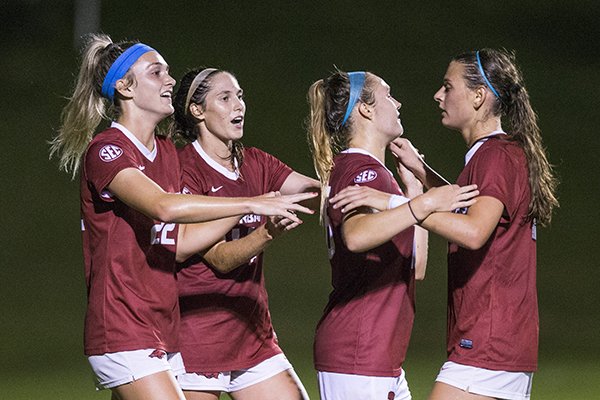 Arkansas players (from left to right) Parker Goins, Taylor Malham, Anna Podojil and Tori Cannata celebrate a goal during a game against Vanderbilt on Thursday, Sept. 26, 2019, in Fayetteville.

Arkansas tied a program record with its 10th shutout of the season Thursday.

With five regular-season games remaining, Arkansas tied the 2009 and 2017 teams for the program's most shutouts in a single season. The Razorbacks have allowed two goals in 1,170 minutes of regulation this season.

Four Razorbacks - Stefani Doyle, Anna Podojil, Brooke Pirkle and Regan Swindall - scored goals against LSU. Doyle scored in the eighth minute to put Arkansas on the scoreboard, and Podojil’s team-leading seventh goal came in the 41st minute to give the Razorbacks a 2-0 lead at halftime.

Pirkle scored in the 57th minute to put Arkansas ahead 3-0 and Swindall capped the scoring with a goal in the 84th minute. The Razorbacks had 14 shots, including eight on goal.

Parker Goins had an assist on the goal by Pirkle to increase her team-leading assists total to seven. Goins has scored 19 points this season, tied with Podojil for the team scoring lead.

CORRECTION: An earlier version of this story incorrectly credited Parker Goins with two assists vs. LSU. The story has been corrected to accurately state Goins had one assist vs. LSU. Her season totals have also been corrected.