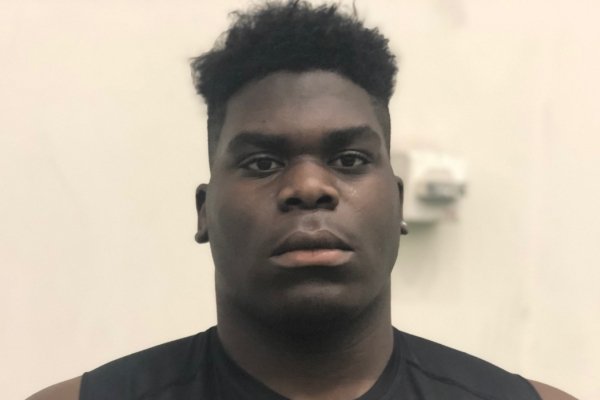 Junior Jaeden Roberts is ESPN's No. 1 offensive guard in the nation.

One of the nation's top junior offensive linemen is planning to visit Arkansas in November.

Jaeden Roberts, 6-6, 350, of Houston North Shore, is planning to visit the Razorbacks for the Mississippi State game on Nov. 2, or the Western Kentucky game on Nov. 9.

He has offers from Arkansas, Alabama, Florida, LSU, Florida State, Georgia, Texas, Texas A&M, Southern Cal, Nebraska and others. ESPN rates Roberts a 4-star prospect, the No. 1 guard and No. 20 overall prospect in the nation for the 2021 class.

Roberts' mother is from Little Rock and he has numerous family members in the capital city.

They are the sons of former Razorbacks linebacker J.J. Jones.

Junior athlete Bryce Stephens, 6-1, 165, of Oklahoma City John Marshall, plans to visit Arkansas for the Auburn game on Oct. 19. He has offers from Arkansas, Nebraska, Iowa State, Memphis, Tulsa and others.

Highly regarded junior running back LJ Johnson Jr. is trying to make his first visit to Arkansas since attending the Fall Kickoff Cookout in July. He said his team's schedule of playing Saturday games is making it difficult, but he's hoping to get to Fayetteville for one of the remaining games.

ESPN rates Johnson a 4-star recruit, the No. 8 running back and No. 175 overall prospect in the nation for the 2021 class.

Junior point guard Jersey Wolfenbarger, 6-2, of Fort Smith Northside, visited Arkansas on Wednesday. She was able to meet former Player of the Year and Washington guard Kelsey Plum during the trip. Plum played for Arkansas coach Mike Neighbors while he was coach of the Huskies.

ESPN rates her a four-star recruit, the No. 5 point guard and No. 19 overall prospect for the 2021 class. Wolfenbarger said she is looking to visit Oregon and Oregon State, but no dates have been set.

Maumelle sophomore offensive lineman Andrew Chamblee, 6-8, 295, plans to visit Virginia Tech this weekend and TCU on Oct. 26. The Hokies were the first school to offer him.

He hopes to visit Florida, Oklahoma and LSU. He received an offer from the Razorbacks while visiting for the San Jose State game. He also has offers from Tennessee and TCU.