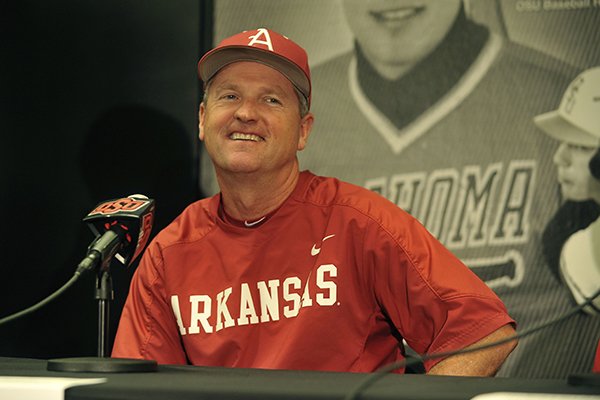 As a head coach or assistant, Van Horn has been part of 11 teams that have played at Oklahoma State’s 38-year-old ballpark. On Saturday, Van Horn will take his 12th and final trip to the aging venue for a scrimmage between the Razorbacks and Cowboys.

“It just an old-school stadium,” Van Horn said. “It will be fun playing over there one more time.”

SHORT HOPS Oklahoma State was 40-21 overall and won the Big 12 Tournament championship last season. The Cowboys hosted and won a regional before losing in three games at Texas Tech during the super regional round…. Matt Holliday, a seven-time MLB All-Star who retired from professional baseball last year, is a volunteer coach at OSU. Holliday is the younger brother of Cowboys coach Josh Holliday and the son of former OSU coach Tom Holliday…. Admission for Saturday’s scrimmage is free.

Oklahoma State will close Reynolds Stadium in March 2020 when the $60 million O’Brate Stadium is scheduled to open for the Big 12 opener between the Cowboys and TCU.

Neither the Cowboys nor the Razorbacks have released their 2020 schedule, but Van Horn said the teams won’t play next year in the regular season.

When Van Horn was a graduate assistant to coach Norm DeBriyn in the 1980s, Arkansas played every year at Reynolds Stadium.

Van Horn also took his Northwestern State team there in 1997 and Nebraska there for conference series three times between 1998-2002. He has taken the Razorbacks there three times as a head coach, including in 2015 when Arkansas swept the NCAA Stillwater Regional.

“Over the years it has always been a tough place to win if you’re the visiting team, all the way back to the so-called old days of Robin Ventura and Pete Incaviglia,” Van Horn said. “It’s just a really tough place to win and half of that was probably because they were always really good.”

Oklahoma State came within one victory last season of playing in the College World Series. Cowboys coach Josh Holliday said he is looking forward to seeing how his team competes against a team the caliber of Arkansas.

“It gives your fall a little pace because you want to make sure you have certain things accomplished with your team prior to playing another school,” Holliday said. “You want to be clear with your kids about how you’re going to take the field, line up for the National Anthem, how you’re going to defend the bunt - all the things that maybe an intrasquad game would not demand you to do. An outside competition kind of pulls all those things together a little bit and gives the kids an idea of what to expect.”

Arkansas is using the weekend as a dress rehearsal for a road trip during the regular season. The Razorbacks traveled to Stillwater, Okla., on Friday afternoon and will go through a workout at Reynolds Stadium on Friday night.

“There really is no substitution for experiencing the travel, the hotel and the breakfast, and just everything it entails,” Van Horn said. “I think it’s good for the freshmen or the junior college transfer to get a feel for that.”

The Oklahoma State scrimmage will be the second scrimmage this fall for Arkansas, which lost 4-3 in 14 innings to Oklahoma at Baum-Walker Stadium on Sept. 20. The Sooners led 4-2 after nine innings.

Saturday’s scrimmage is scheduled to last 14 innings. There will be a break between the end of the seventh inning and the top of the eighth that will allow for the field to be raked and a cooling off period for players and umpires.

Holliday said he is disappointed his team won’t get a chance to face Martin, who is projected by Baseball America to be a top 10 overall pick in next year’s MLB Draft.

“We want to see a preseason All-American player because I think it’s part of the experience.”