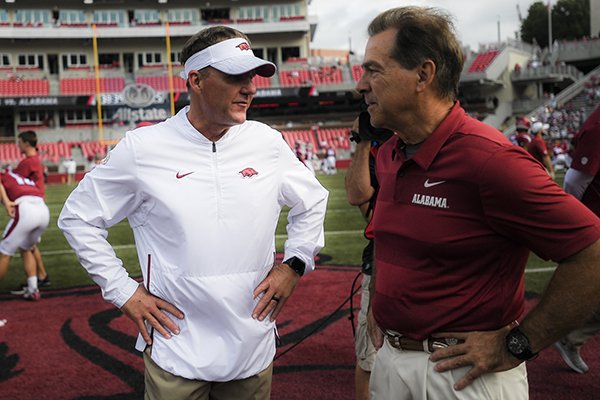 FAYETTEVILLE — Arkansas’ game at No. 1 Alabama next week will be shown by ESPN in primetime.

The game between the Razorbacks and Crimson Tide is scheduled to kick off at 6 p.m., the Southeastern Conference announced Monday. It will be Arkansas’ third game on the network in four weeks. The Razorbacks played Texas A&M and are scheduled to play Auburn this weekend in the 11 a.m. time slot.

Alabama is 6-0 overall and 3-0 in SEC play following a 47-28 victory at Texas A&M on Saturday. The Crimson Tide are scheduled to host Tennessee this week.

Led by quarterback Tua Tagovailoa, last season’s Heisman Trophy runner-up, Alabama has one of the nation’s top offenses this season and is averaging 51 points and 536.8 yards per game.

Arkansas has lost 12 consecutive games to Alabama, including 65-31 last season in Fayetteville. The Razorbacks have not won at Bryant-Denny Stadium in Tuscaloosa, Ala., since 2003.