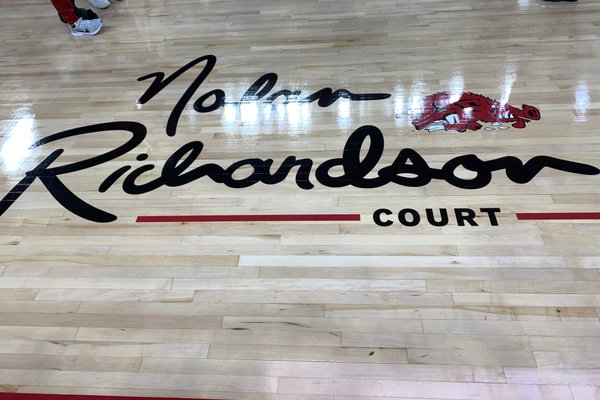 The logo for Nolan Richardson Court at Bud Walton Arena is shown Sunday, Oct. 20, 2019, prior to a game between Arkansas and Arkansas-Little Rock in Fayetteville.

The Razorbacks unofficially open the Eric Musselman era with a 15-point win over Darrell Walker's Trojans in Bud Walton Arena.

We will have much more, including plenty of stats and numbers, from today's game later on WholeHogSports.com.

An update on Desi Sills: He left the Razorbacks team bench and headed toward the locker room. He has been down there since the under-8 timeout.

Adrio Bailey nearly put a Trojans defender in the rim, but he missed the dunk and was fouled in the process. He made both free throws to set the score at what should be the final stoppage in today's game.

Isaiah Joe is such a threat to beat teams from the perimeter that he becomes extremely valuable in the pick-and-roll game. He attracted two Trojans defenders as he caught on the right wing and fired to Reggie Chaney in the paint, then Chaney found Ethan Henderson running baseline. Henderson was fouled and hit 1 of 2 free throws out of the under-8 timeout.

Jalen Harris then hit a 3 from the left wing after great dribble penetration by Mason Jones.

Arkansas guard Desi Sills was just helped off the floor by team trainers. He looks to be favoring his right calf a bit. He also exited the game earlier with cramps. We'll try to get an update from Musselman after the game.

Arkansas' lone bucket since the last pause in play came from Reggie Chaney, who was set up nicely at the rim by Mason Jones after setting a pick for the guard at the top of the key. Chaney, for stretches, has been pretty active today. He just rebounded a Desi Sills miss from 3 and will be at the line when play resumes.

Isaiah Joe has been absolutely special today. Arkansas' stats are still not working, but I have Joe down for 25 points on 8 of 15 from 3-point range. He's been great in catch and shoot all game. His one 3 off the bounce was filthy, too. He dribbled twice with the right hand, went back to front between the legs then worked into a stepback from the right wing. Nothing but net.

I'll update with stats when they are made available.

The Razorbacks, much like they did in the first half, open with a flurry, scoring 10 straight to begin the second half to create a good bit of separation. Isaiah Joe knocked down a 3 from the left wing in front of the Arkansas bench, forcing Darrell Walker to call for time. I have Joe 5 of 11 from 3. He is 5 of 10 in catch-and-shoot situations.

Reggie Chaney picked up his fourth foul prior to the final media timeout of the first half. After securing a rebound, Jimmy Whitt fired a nice pass up the floor to Chaney, who took two steps and collided with a Trojans defender in the lane. Chaney wasn't happy, and neither was Eric Musselman.

Arkansas' offense has gone pretty quiet since a hot start. Still don't have any official stats right now. Jeantal Cylla, though, did bury a corner 3 after UALR pulled within 26-22.

The Trojans' offense has finally come alive a little more than halfway through the first half. Arkansas' stat feed is not working, so I don't have any numbers on hand at the moment.

A few careless turnovers from Jalen Harris and Mason Jones stood out in the last few minutes. Harris, who caught the ball at the top of the key, drove left and had a free lane to the rim, but he picked up his dribble thinking Adrio Bailey would cut backdoor. Harris was whistled for traveling after hesitating to make the pass. Jones was also whistled for a player control foul on the perimeter. He has been called for two charges already.

Razorbacks forward Reggie Chaney may not see the floor again in the first half. He picked up three fouls in about two minutes, and a couple of those fouls were completely avoidable, too.

Continue to be impressed with Arkansas' ball movement. There was a possession well before the under-12 timeout in which the Razorbacks had to have made 10 passes. It all led to a wide-open 3 for Mason Jones on the left wing, which he canned. It was beautiful basketball.

Trojans forward Kamani Johnson will be at the free throw line when play resumes.

The Razorbacks look solid on both ends in the opening four minutes here. Desi Sills has five points on a corner 3 and a layup in transition. Isaiah Joe, too, knocked down a 3 in front of the Trojans' bench, drawing the timeout. He is 1 of 3 from deep, 1 of 2 in catch-and-shoot situations.

Jimmy Whitt has been strong so far. He's done a majority of the ballhandling. The thing I like is that he knows when to push the ball in transition, when to attack the rim himself or run a set in the halfcourt. Impressive start.

Senior forward Adrio Bailey is in uniform and went through the team's pregame layup lines. Eric Musselman said earlier in the week that Bailey had been experiencing back spasms. He was limited in practices in terms of dunking and most full-court work.

Bailey and grad transfers Jeantal Cylla and Jimmy Whitt served as Arkansas' captains prior to tipoff.