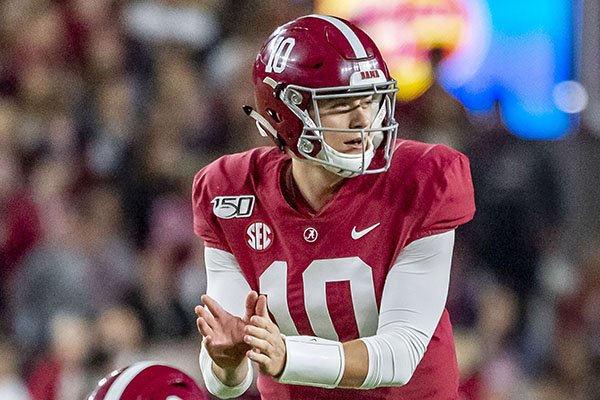 Alabama quarterback Mac Jones (10) during the second half of an NCAA college football game against Tennessee, Saturday, Oct. 19, 2019, in Tuscaloosa, Ala. (AP Photo/Vasha Hunt)

FAYETTEVILLE -- When Alabama beat the University of Arkansas 65-31 last season at Reynolds Razorback Stadium, Mac Jones got on the field for the Crimson Tide late in the game as a holder.

Jones will play a much larger role when No. 1 Alabama plays Arkansas on Saturday night at Bryant-Denny Stadium in Tuscaloosa, Ala.

Jones, 6-2 and 205 pounds, replaced Tagovailoa with 6:03 left in the second quarter of the Tide's 35-13 victory over Tennessee last week.

Alabama Coach Nick Saban said he's hopeful Tagovailoa will return against No. 2 LSU on Nov. 9 after the Tide have an open date.

With Jalen Hurts transferring from Alabama to Oklahoma -- where he's putting up big numbers and challenging Tagovailoa and LSU quarterback Joe Burrow for the lead in Heisman Trophy polls -- Jones suddenly has been thrust into the spotlight.

"I think a lot of people underestimate Mac Jones," Alabama tight end Miller Forristall told reporters Monday. "I don't think they know how good he's going to be or how good he is.

"That's something where it's always been that, 'What's going to happen after Tua?' Mac Jones is really good."

Jones was the star of Alabama's intrasquad game in the spring when he completed 19 of 23 passes for 271 yards and 2 touchdowns.

In six games this season, Jones has completed 20 of 32 passes for 237 yards and 1 touchdown with 1 interception. Against Tennessee, he hit 6 of 11 passes for 72 yards.

"When he came in, he was just a little bit nervous," Alabama running back Brian Robinson said. "We had to pick him up. The more he played, he got a little bit more comfortable in the game and started to make plays."

Alabama Coach Nick Saban said Jones didn't do anything to hurt the Tide against Tennessee.

"All in all, I thought he handled the situation really well," Saban said Monday. "It's a difficult circumstance to get thrown into.

"We've got a lot of confidence in Mac. With a week of preparation, I think he'll do a lot better in this game."

Forristall said Jones, a four-star recruit, has a strong arm and that the Tide's game plan won't change against Arkansas without Tagovailoa.

"Mac can throw the crap out of the ball," Forristall said. "It's not like our playbook gets limited or we stop attacking down the field. We've got to roll just the same as we always do."

Alabama junior Henry Ruggs, who has 22 catches for 466 yards and 5 touchdowns, said Jones has worked with all of the receivers.

"We practice with every receiver, so he has relationships," Ruggs said. "He knows what we like and what we don't like, so he'll be ready."

With Jones as the starting quarterback, Alabama is still a 32-point favorite.

"He's a confident player," said Forristall, who has 10 catches for 120 yards and 3 touchdowns. "He plays with a lot of emotion. That's something guys feed off of, and love and appreciate.

"That's something I love about the guy. He's someone that's going to be fun to play with."

Forristall said he expects Jones to be more comfortable against Arkansas after a full week of practice as the starter as opposed to playing off the bench in the Tennessee game.

"He'll be prepped and ready to go for Arkansas," Forristall said. "I'd expect to see him come out guns blazing."

"I think with Mac, it's not a matter of arm talent or ability," Saban said Monday. "It's staying focused and being able to execute on a consistent basis and make good choices and decisions and not think about it too much and just take what the defense gives.

"When he's done, that he's been very, very effective and that's what we've worked with him on throughout the season. And for the most part he's done a pretty good job of that."

ARKANSAS AT NO. 1 ALABAMA