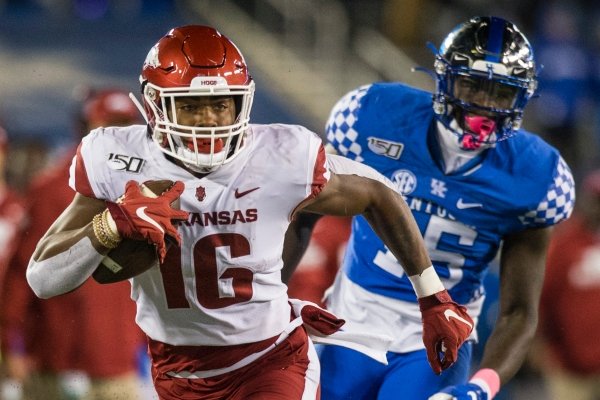 FAYETTEVILLE -- University of Arkansas freshmen Treylon Burks and Trey Knox both turned in one play apiece last week that shows they have the ability to reach SEC stardom.

Knox made the first of the eye-opening grabs. Working on the right flank on a third-and-6 play in the second quarter, Knox stopped on a dime and contorted in midair to bring in a back-shoulder throw from Ben Hicks on the Arkansas sideline. The 19-yard reception, called a "circus catch" by SEC Network analyst Matt Stinchcomb, came against Auburn cornerback Roger McCreary in tight coverage.

"The one to Trey is what we hung our hat on a lot at our couple of previous stops, at Clemson," Arkansas offensive coordinator Joe Craddock said. "When you had a guy like DeAndre Hopkins and Tajh Boyd throwing the ball, we made a lot of those back-shoulder type plays. That's something that we kind of pride ourselves and our offense on, we kind of take a lot of shots down the field and being able to read that back shoulder.

"It was good to see Ben kind of read that back shoulder, give him a good ball, and it was good to see Trey open his hips and make that play over there on the sideline. Again, it just takes a lot of repetition, a lot knowing each other, being on the same page as each other. It's not something that is easy to do."

[Video not showing up above? Click here to watch » https://www.youtube.com/watch?v=wohXcYuAY7E]

Burks' grab came on a third-and-9 snap from the Arkansas 38 on the Hogs' first series of the second half. Lined up in the right slot, Burks made an in-cut after colliding with nickel back Jordyn Peters about 10 yards deep. Hicks' delivery came in high over Burks' left shoulder, but the 6-3, 223-pounder twisted in the air, pawed it with his left hand over to his right, then cradled it with both hands as he hit the grass.

"The concentration of him taking it to the ground was impressive," Coach Chad Morris said. "We've seen him make incredible catches in camp, and that was definitely one that you had to go back and say, 'How did you do that?'

"Then with Trey Knox being able to contort his body in so many directions and be able to catch a football. Again, it just shows you where their future lies. They're going to have an incredible career, and we've got to continue to grow those guys and get them the ball more."

[Video not showing up above? Click here to watch » https://www.youtube.com/watch?v=GyVg_USC7sY]

Coach Chad Morris will be inducted into the Texas High School Football Hall of Fame next year with a class that includes former Razorback receiver Chuck Dicus.

"I'm obviously very honored," Morris said. "There's so many people along the way that you want to thank, and a lot of great players I've been around and great coaches that helped get to that point. I got the phone call about three weeks ago and was very flattered."

Senior tackle Colton Jackson is doubtful for Saturday with a back injury he suffered against Auburn.

Jackson was at practice Tuesday but was unable to finish, Chad Morris said. On Wednesday, Jackson and left guard Austin Capps (concussion protocol) were both out, with Morris saying Capps is out for Saturday at Alabama and Jackson is doubtful.

If Jackson and Capps both miss Saturday's game at Alabama, it will mark the fifth and sixth games lost by a projected offensive line starter due to injury, plus all eight games for tackle Noah Gatlin, who had season-ending knee surgery during camp.

Capps is the ninth Razorback to enter concussion protocol since the start of camp, and the eighth on offense.

The quarterbacks and receivers had an unimpressive stretch early in practice Wednesday, with several off-target throws and dropped passes in a swirling wind.

Senior Ben Hicks continued to practice with his sore left shoulder and take top reps with junior Nick Starkel, but his delivery did not look smooth and many of his passes lacked sizzle.

Cheyenne O'Grady, who will serve as offensive captain this week, snared his 11th career touchdown pass last week, a 45-yard catch-and-run score that might slot second on his career highlight reel behind his tackle-breaking 62-yard touchdown against Colorado State.

On the score against Auburn, O'Grady kept his composure after Big Kat Bryant pried the ball free on about the 5-yard line with a pull from behind, adjusted his body in midstride, found and recaptured the ball, and trotted across the goal line.

Sophomore Kirby Adcock worked at first-team left guard in the portions of practice open to the media Wednesday. He played with the first-team offensive line against Auburn after senior Austin Capps suffered a concussion in the first half of the Auburn game.

"I'm confident in Kirby," center Ty Clary said. "I believe in him, and I know he believes in himself. He's an Arkansas boy [from Nashville], so I know he'll give it his all out."

For the second day, redshirt freshman quarterback John Stephen Jones worked with the first unit at the start of period five as the media was departing the field.

"We've got different periods of practice we work different things," Coach Chad Morris said when asked whether there would be an opportunity for Jones or true freshman KJ Jefferson to get playing time. "I mean, we continue to bring those guys along and see how the development goes.

"If the opportunity presents itself, then you move forward. That has been something we've done, for the most part, I'd say the last two or three weeks for sure. We're just trying to bring these guys along and get them some reps."

Defensive tackle T.J. Smith didn't get full credit for a tackle on third and 1 on Auburn's first series of the second half. But it was largely his work that got it done.

Smith shoved 309-pound left guard Marquel Harrell into the backfield on a run for Kam Martin designed to go at right tackle. The penetration caused Martin to take an extra step at getting on his track.

Meanwhile, fellow senior McTelvin Agim slid off a block from center Kaleb Kim and assisted Smith at stopping Martin in his tracks.

Offensive coordinator Joe Craddock said quarterback Ben Hicks told him he felt like he'd been hit by a car after the 51-10 loss to Auburn.

Center Ty Clary did not like hearing those words.

"I mean, it just makes us feel lousy," Clary said. "I hate it a lot. I hate giving up hits more than anything else. I gave up one in the game, and I was kicking myself for it the whole game."