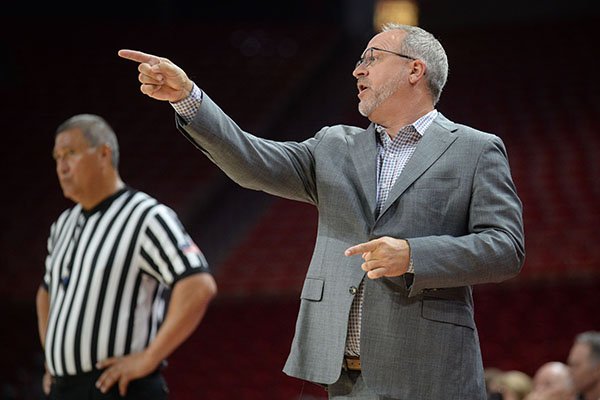 University of Arkansas women's basketball Coach Mike Neighbors and his staff hosted what could arguably be called the best group of prospects to ever visit the program Saturday.

ESPN 5-star point guard Elauna Eaton, 6-0, of Nettleton was one of 11 prospects that made unofficial visits. She officially visited Fayetteville in August. ESPN also rates Eaton the No. 9 guard and No. 41 overall recruit in the nation for the 2020 class.

Razorbacks post pledge Emrie Ellis, 6-2, of Ada (Okla.) Vanoss was one of four junior prospects that visited. Bentonville junior center Maryam Dauda, 6-4, an ESPN 4-star recruit and the No. 1 post player in the nation for the 2021 class, along with junior guards Ashlyn Sage, 6-2, of Weatherford, Okla., and A.J Marotte, 6-1, of Vista Ridge, Texas, also visited.

Sage announced her commitment to Neighbors on Saturday evening.

Four highly touted sophomores were among the group of visitors. Center Amauri Williams, 6-3, of North Little Rock is an ESPN 4-star, the No. 5 post player and No. 25 overall prospect in the nation for the 2022 class. She made he trip to Arkansas as did forward Tyra Robinson, 6-2, of Little Rock Parkview, guard Jaiden Thomas, 5-10, of Conway and forward Sa'Myah Smith, 6-2, of DeSoto, Texas.

ESPN rates Smith a 4-star recruit, the No. 5 forward and No. 17 overall prospect in the nation for the 2022 class.

Robinson has an Arkansas offer while Thomas has several offers while drawing strong interest from the Razorbacks.

Williams has 11 scholarship offers including ones from Arkansas, Vanderbilt, Florida Ole Miss, Texas Tech and others. She said she enjoyed the hospitality during last weekend's visit.

"It was a really good experience," Williams said. "When I walked in they had everything prepared. There weren't any mix-ups or anything mishandled. It was very professional."

Watching Neighbors and staff conduct practice was one of the better parts of the trip.

"They get in reps, but it's at a moderate speed," Williams said. "You're not going through it like full speed and messing up. They're doing it at a moderate pace, and so they get things right, and they do it right every single time, every singe rep. That's what I like, and they're really big in player development."

She started 26 of 27 games last season for the Charging Wildcats while averaging 12.2 points, 9.7 rebounds and 2.1 blocks a game.

Williams, who attended a Neighbors camp as an eighth-grader, said she is looking to visit another school or two.

"I will be trying to take one or two more visits before the year is over with," she said.

Williams has been featured on the website Overtime and has made an appearance on HBO.

Arkansas was the first to extend an offer to Clardy.

"Getting my first offer meant a lot to me because my hard work was paying off, and it motivated me to work even harder," she said. "Also I'm thankful to the coaching staff for believing in me at such a young age."

"It was exciting to watch the intensity of the team practice and see some of the players I've been looking up to in person," Clardy said. "I also enjoyed making connections with other elite players and going on the campus life tour. All the coaching staff and players made me feel welcome."