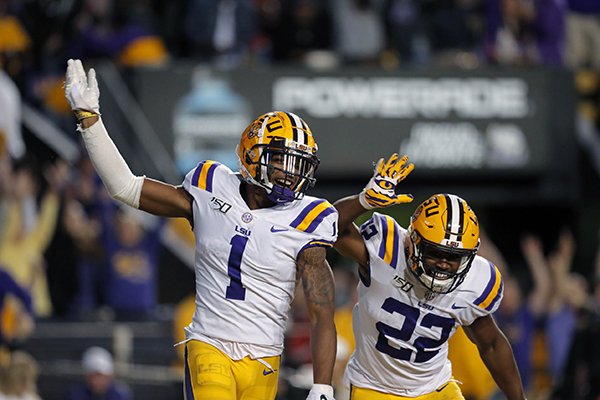 There’s one great game and one decent game out of five SEC contests this weekend.

The biggie is Auburn at LSU. A showdown of Tigers.

Auburn will be practically eliminated for the SEC Championship Game and the College Football Playoff with a second loss.

A victory would move LSU to 8-0 and send the Tigers into an off week before the biggest game of the season when they take on a presumably undefeated Alabama.

That game could control the destiny as far as the SEC goes in the playoffs.

The LSU-Alabama winner should make it to the SEC Championship Game, and the loser becomes a strong contender for the fourth spot in the playoffs.

LSU has a slightly easier road to the championship should it win. It closes out at Ole Miss and then hosts Arkansas and Texas A&M.

Alabama will still have to travel to Auburn in the regular-season finale, and that’s a game when the records haven’t mattered too many times to list them all.

Every team in the SEC East already has at least one loss, and only Florida and Georgia have just one. The Gators lost to LSU 42-28 which was a lot more respectable than the Bulldogs’ 20-17 overtime defeat to 3-4 South Carolina.

The Gators and Bulldogs are off this week as they prepare to face each other next Saturday in the biggest game of the weekend.

A lot can happen in the next five weeks, but the playoff picture is getting clearer as is the SEC is in danger of not being able to fill all of its bowl tie-ins.

Arkansas, Ole Miss, Vanderbilt and Tennessee already have five losses and and a tough road ahead of them.

Tennessee may have the best shot at postseason play. It hosts South Carolina tomorrow and then gets Alabama-Birmingham, at Kentucky, at Missouri and Vanderbilt.

Had a decent week picking last week, getting back on the winning track with 6-1 to bring the overall record to 56-18.

The Red Wolves have been swamped with injuries but are in a good spot. Not one of their final five opponents have a winning record. Of course, neither do they. Arkansas State 35-24

LSU quarterback Joe Burrows faces his toughest defense of the season, but the Auburn offense is built on the run game. LSU is No. 2 in the SEC against the run. LSU 27-17

The Tigers have played only two road games and lost them both. The Wildcats, who are fighting to get bowl eligible, were shut out against Georgia. If they still had ties in college football that might be the pick. Missouri 24-23

The Bulldogs are in a rebuilding year, and the Aggies are the Aggies, unexplainable. A&M looks to have a stranglehold on fourth place in the SEC West even though it closes the season against Georgia and LSU, both on the road. Texas A&M 31-21

Both of these teams are playing better than their records would indicate. The Gamecocks are favored on the road in the SEC which doesn’t happen often with the middle-division teams of the SEC. That should fire the Vols up. Tennessee 24-21