Prospect set to get third look at UA 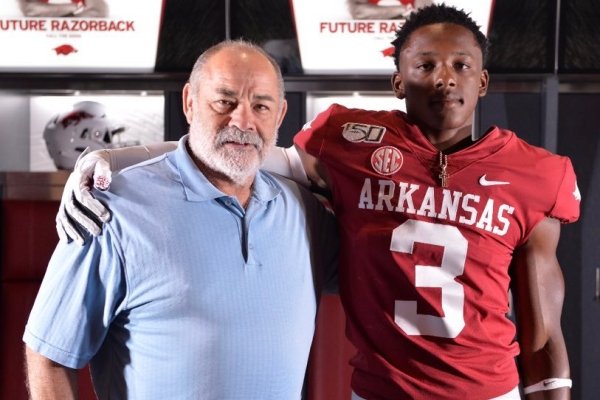 Linebacker Aaron Moore will make his third visit to the University of Arkansas when he officially visits the Hogs this weekend for the Mississippi State game.

"This is my first visit to a game, so I'm excited to experience what it's like to be on the Hill and what kinda environment it is," Moore said.

He visited Fayetteville with his father and mother for the Fall Kickoff Cookout in late July, and he also visited on March 9 for an elite prospect day with his mother.

Moore will be looking at several things during Saturday's game.

"How Arkansas performs versus a team like [Mississippi] State and see how the coaches coach," Moore said.

Arkansas enters the Mississippi State game with a 2-6 record after going 2-10 last year. Moore wants to see more victories, but he isn't deterred by the record.

"It's important to win for sure, but overall that's not going to affect my decision because I know Arkansas is a team that was very good not too long ago, and working to get them back to the top of the SEC is something I could take pride in," Moore said. "I think it's a program that's on the rise and needs young players who are willing to come in and work."

In eight games this season, Moore has 42 tackles, 10.5 tackles for loss, 5 sacks, 3 quarterback hurries, a forced fumble, a recovered fumble and a blocked punt.

When recalling his previous two visits to Arkansas, Moore said the fans and coaches stood out.

"The love from the fans is definitely like no others, and the attention the coaches showed me," Moore said.

National recruiting analyst Tom Lemming of CBS Sports Network rates Moore a three-star-plus prospect. Defensive coordinator John Chavis is leading the efforts to land Moore by selling the opportunity to help the program get on the right track.

"That Arkansas is a great place to be, and that this class is going to be the one to turn it around," Moore said.

His mother will accompany him on the official visit. Two other schools appear to be in the running for Moore.

"I do have another visit and may be adding another, but me and my family are keeping those schools private right now," he said.