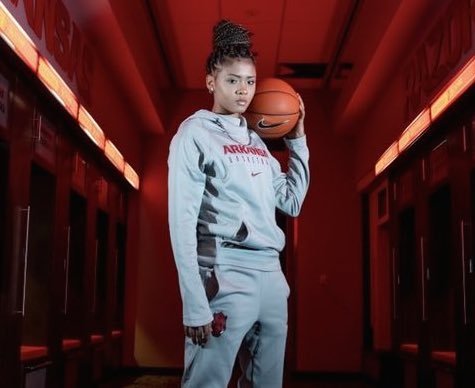 Guard Elauna Eaton, a five-star recruit from Nettleton, has committed to Arkansas over more than 30 other scholarship offers.

Eaton, 6-0, had 34 scholarship offers, before choosing the Razorbacks over other finalists Ole Miss, LSU, Southern California and North Carolina State. She officially visited all five schools.

Arkansas coach Mike Neighbors and his staff made her decision easy, she said.

"It was a great feeling, I enjoyed the opportunities to speak with the coaches and I enjoyed being around the girls," Eaton said. "It was an overall great environment and every time I've visited there it has felt like home since the new coach has been there."

"The last time I visited there and saw their practice," Eaton said. "Going to the practice really kind of sealed the deal for me. Just seeing how they play and see how they play together. The way they play basketball, I fit that system."

Her connection with Neighbors, along with his vision for her, put Arkansas in the lead.

"The goals he set for me, like he believes in me," she said. "I wanted to play for a coach that believed in me. He has set major goals for me and I know he'll help me try and reach those goals. We just connect on a different level and it's an amazing feeling."

Eaton didn't tell Neighbors of her decision before her announcement Wednesday.

"I surprised him," Eaton said.

The Razorback have an exhibition game Wednesday night against Oklahoma City.

"Hopefully, he will go into tonight's game with a smile on his face," she said.

As a junior, Eaton averaged 16.2 points, 4.6 rebounds, 1.8 assists and 1.6 steals per game while leading the Raiders to a 25-3 record and the second round of the state tournament before falling to eventual state champion Little Rock Christian. She shot 48 percent from the field, 37 percent beyond the 3-point line and 74 percent from the free throw line.

Neighbors expects her to make an immediate impact.

"He wants me to get the ball to the rim and go with it," Eaton said. "He said he was going to let me play freely. He said as long as I'm working hard, you can do whatever you want to do. As long as you play within the system, take the shots."

Eaton plans to sign with the Razorbacks on Nov. 15. She said her family was on board with her decision.

"It was always a family decision," Eaton said. "Everything we do is family oriented."

She joins guard Rylee Langerman, 5-9, of Christian Heritage in Del City, Okla., and center Destinee McGhee, 6-2, of Madison Academy in Alabama as commitments in the 2020 class. Langerman and McGhee are 4-star prospects by ProspectsNation.com.