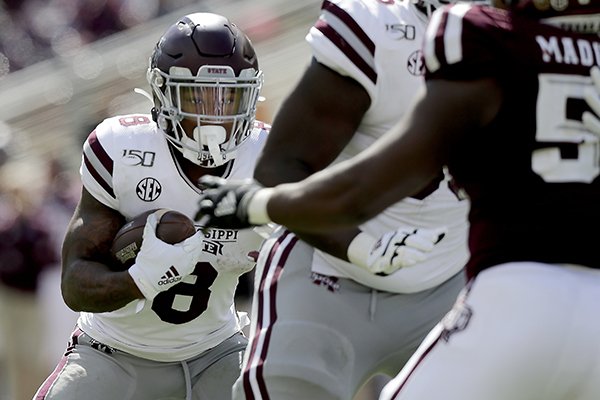 Mississippi State running back Kylin Hill (8) looks to run behind his offensive line against Texas A&M during the second half of an NCAA college football game, Saturday, Oct. 26, 2019, in College Station, Texas. (AP Photo/Sam Craft)

There hasn't been much for the Bulldogs and their fans to feel good about since then.

Mississippi State has plummeted by going 1-5 in its past six games, with its lone victory at home 28-13 over Kentucky.

It is Mississippi State's longest losing streak since 2005 when the Bulldogs dropped seven games in a row capped by Arkansas' 44-10 pounding in Little Rock.

"There's frustration with four straight losses, so nobody is happy," junior running back Kylin Hill said after the Texas A&M game. "But we've got a lot of older guys to tell the young guys to keep their head up.

"It could be way worse, we could have zero wins. At times like this, you have to have a lot of leadership and just keep everybody up."

Joe Moorhead, the former Penn State offensive coordinator who is 11-10 in his second season as the Bulldogs' coach, was asked Monday at his weekly news conference about not winning since the Kentucky game.

"Regardless of the team and regardless of the situation, there are going to be highs and lows in any college football season," Moorhead said. "It does not seem that long ago [since beating Kentucky].

"It was great to get that SEC win and particularly do it at home, but you can't look in the rear-view mirror. You have to look through the front windshield and see what is ahead of you. I know our kids are focused on everything we need to do this week to get ready to beat Arkansas."

"First and foremost, I thought the offensive line did a good job of being physical upfront and getting a push to create some movement, some horizontal and vertical seams in the defense," Moorhead said. "I thought Kylin, sometimes talented runners like him, they want to create something maybe and be a little bit more patient. What he did was he got downhill and got behind his pads and ran with a lot more physicality."

The previous game against LSU, Hill was held to 34 yards on 15 carries.

"Honestly, he had a very good week of practice," Moorhead said. "He was very positive, worked very hard and what doesn't show up on the stat sheet was his pass protection was a lot better, as well. It was a good bounce-back game for Kylin."

Mississippi State true freshman quarterback Garrett Shrader has played in seven games with three starts, including the last two games. He completed 13 of 34 passes against Texas A&M for 194 yards and 3 touchdowns with 1 interception.

"We really simplified the game plan," Shrader told the Northeast Mississippi Daily Journal of the second0half adjustments. "We just went back to our base stuff -- just Week One, Week Two stuff -- stuff that we had in at the start of camp.

"I just executed it and did the small, little things right. I got a hang of where their blitzes were coming from and where their defense was working. That's what allowed us to have some success in the second half."

Shrader has completed 75 of 136 passes for 1,022 yards and 7 touchdowns with 5 interceptions on the season.

"I don't think he was necessarily pressing it," Moorhead said of Shrader struggling in the first half against the Aggies. "Some of it was accuracy issues, some of it was reads, and some of it was protection on the third-down stuff.

"I think we got in and kind of made some adjustments. Some things were right in his face, some things were more progression-oriented and full-field oriented. I think [he was] able to get his feet underneath him and set the pocket, and I thought he bounced back nicely in the second half."

Texas A&M gained 441 yards against Mississippi State and was 8 of 11 on third-down conversions.

"We brought some pressures and had some guys free to the quarterback, and they were either a step slow or did not get in [Kellen Mond's] face to knock the ball down or knock the quarterback down," Moorhead said. "They had some very talented receivers that were able to create some separation, either inside when we were outside leverage or outside when we inside leverage."

Mississippi State leads the SEC with 18 turnovers and had 3 -- with 2 lost fumbles -- against Texas A&M that resulted in 21 points for the Aggies.

"We gave it away three times and didn't get any [takeaways], so we were minus-three in the turnover battle and minus-six in the last two weeks," Moorhead said. "I think minus-seven over the last three [weeks].

"It is going to be tough to win a lot of games when you are turning it over and not creating very many turnovers. We need to get better there."

"You put an early game script together where you're trying some different things and different formations to see what [defense] they're in," Moorhead said. "We've got to make sure we're making the right calls, and when we do, make sure the kids are executing them."