Hogs make up for lost time to make Williams' top 7 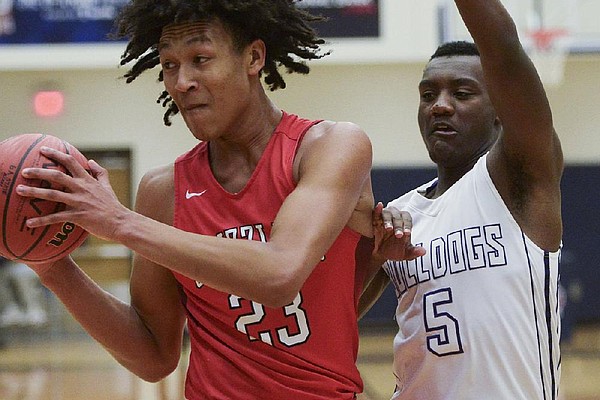 Other schools had been recruiting Williams long before Musselman was announced as Arkansas’ new coach on April 7. Williams said Musselman and assistants Corey Williams and Clay Moser have worked hard in making up for lost time.

Williams, who made an official visit to Oklahoma State in June, is looking to visit other schools, including Arkansas.

Williams was named the Division I player of the year by the Northwest Arkansas Democrat-Gazette after averaging 16 points, 11 rebounds and 3 blocks as a junior while leading the Grizzlies to the Class 6A state title.

He said getting down to his top seven was about his comfort level with each school.

“It really it just came down to how much of a bond I had with the coaches and the team and knowing it’s a family environment and knowing they can help me become the best player I can be,” Williams said.

Williams, who made an unofficial visit to Fayetteville on June 26, is rated an ESPN 4-star prospect, the No. 12 center and No. 86 overall prospect in the nation in the 2020 class.

He said he's received several opinions at school about where he should attend college.

While he appreciates the advice, Williams said he has to go by what he experiences behind the scenes.

“They see it from the outside of things knowing that’s their favorite team to watch or that’s the school they went to growing up or attended college,” Williams said. “They don’t see what’s going on the inside, like if it’s a good coaching staff or if they can help make me better as a player to get me to that next level after college.”