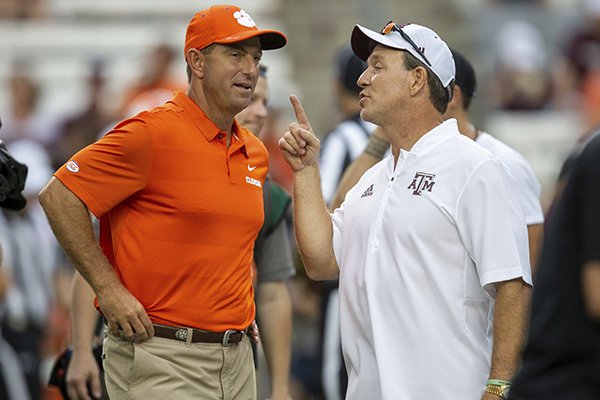 This is an interesting Saturday in the SEC.

Two games, LSU at Texas and Texas A&M at Clemson, have national significance, and the University of Arkansas at Ole Miss is hugely critical for the programs.

If the Razorbacks don’t get this one, they may be looking at a second season without a SEC win, and that’s not going to bode well with the fans.

Chad Morris has had this game circled for months and even admitted the Hogs schemed for this game in August.

It was the worst opening weekend for picks in history. Went 6-5, and combined with Florida’s opening win, stand 7-5. Looking to get back on track tomorrow.

The Razorbacks’ defense gave this game away last year, and now they are being counted on to save the game. The Rebels struggled on offense last week in their 15-10 loss to Memphis, but look for redshirt freshman quarterback Matt Corral to be much more relaxed at home. Hogs need to give the ball to Rakeem Boyd at least 22 times. Arkansas 24-21

The Running Rebels opened with a win over Southern Utah, which is nothing to get excited about. The Red Wolves started with a hard-fought loss to SMU. The quarterback position may separate the two. Arkansas State 28-17

The Tigers’ comeback win over Oregon was classic Gus Malzahn. Why did he ever quit calling the plays? Auburn 56-13

Fully expect the Gators to beat the UT out of Martin, although they do have issues at quarterback. Florida 49-3

The Bulldogs won’t be looking ahead to next Saturday’s game with Arkansas State. Georgia 56-10

The Wildcats handled Toledo, and there’s no reason to believe this one will be any different as they tune up for a showdown with the Gators. Kentucky 42-14

A huge test for the Tigers in Austin. If they take care of business, notice would be served that they are a national contender. The Longhorns continue to claw their way back onto the national scene. LSU 31-28

The Bulldogs didn’t dispatch Louisiana-Lafayette without a fight, but they are eyeing a 3-0 start before getting a reality check. Mississippi State 35-13

Maybe the Tigers learned a lesson in their loss to Wyoming: SEC teams don’t go on the road to Laramie. The Mountaineers barely beat James Madison, and he died in 1836. Missouri 38-14

The Gamecocks’ embarrassment at losing to North Carolina will be taken out on their little brother. South Carolina 42-10

If not for the Vols, the Razorbacks might have gotten more national thunder for barely beating Portland State. The Vols fell to Georgia Southern, 38-30, and needed a touchdown with 53 seconds to play to make it that close. BYU 24-21

The Aggies will be even more loud and proud if they can knock off the defending champion, and while it won’t be easy, they have the personnel and the coaching to win a big one on the road. Texas A&M 31-28

Both teams opened with a loss. Derek Mason is a really popular and likable coach, and he seems to fit the Commodores everywhere but the win column. He needs this win before an open week and then hosting LSU. Vanderbilt 21-20