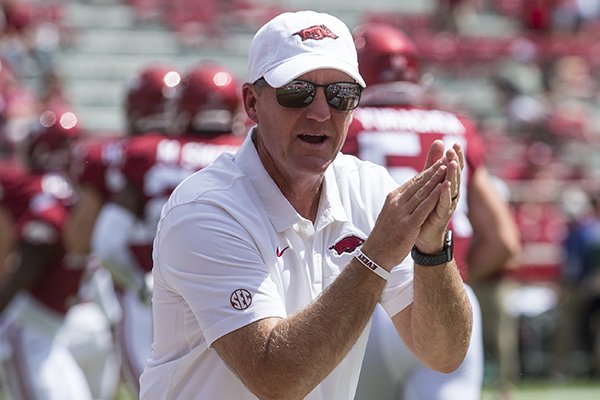 Arkansas coach Chad Morris is shown prior to a game against Portland State on Saturday, Aug. 31, 2019, in Fayetteville.

Unfortunately for tonight's loser of their 6:30 p.m. SEC Network televised SEC opener at Vaught-Hemingway Stadium in Oxford, Miss., all mirrors not only will reflect the past but also reflect a fan base that's at best glowering with discontent and at worst resigning to apathy.

It seems an unfair reflection on either coach, considering what each inherited.

But fair seldom figures into assessing losing in the SEC. The conference's aptly descriptive slogan: "It just means more," just means more pressure on those not winning.

Petals off that blooming rose started dropping with the Rebels opening loss, 15-10, last Saturday to Memphis.

Upon Bret Bielema's Razorbacks closing 2016 losing 24-7 and 24-0 halftime leads in 28-24 and 35-24 to Missouri and Virginia Tech, the Razorbacks mostly have lost games while their fans lose confidence.

Resilient describes the Razorbacks and Rebels fan bases, but reality can recoil even the resilient. Seems tonight's reality for both marks the best 2019 chance for a SEC victory and perhaps other SEC successes from confidence built.

Asked Wednesday the importance of tonight's game, both coaches said one of these standards: "Every game is important," "the SEC opener is always important," and "it's important because it's the next game."

But a recruiting question to Morris regarding tonight's impact hammered home what's at stake.

"For all aspects of our program it's a great opportunity to continue to step in the right direction," Morris said. "I mean, this is a big ballgame. We understand that. These players understand that. A ballgame like this and you go win on the road, it does wonders for your program."