Richardson making most of opportunities as senior 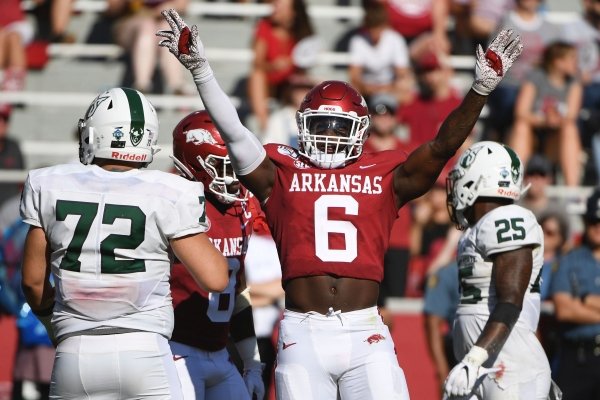 FAYETTEVILLE — Gabe Richardson strives to be the same guy every day.

There is no doubt he is a positive person, full of confidence and personality. All of the physical tools are there, too, at a chiseled 6-3, 240 pounds.

When senior defensive end Dorian Gerald was lost for the season after Week 1 with a strained artery in his neck, Richardson didn't try to fill Gerald's void all by himself. He understood that would be a by-committee task split between him and a handful of Arkansas freshmen, including Mataio Soli, Collin Clay and Zach Williams.

In the Razorbacks' first full game without Gerald on Saturday at Ole Miss, Richardson led the team's defensive ends group and put together the most productive game of his career. He finished with seven tackles, which tied for third most on the team, and four of his stops were unassisted.

He also recorded the first full sack of his career on Rebels quarterback Matt Corral. Richardson, on 3rd and 10, forcefully shoved the redshirt freshman out of bounds, bringing on the Ole Miss punt team. Arkansas' offense then got on the board with a 36-yard Connor Limpert field goal on its next possession.

Richardson, when asked about his hit on Corral on the Razorbacks' sideline, said the sack was "meant to happen."

"I just had to stay the course and do my job," he added. "It was in the system for that to happen, so I just made the play when the time came."

The senior remarked that he was happy he could share the experience of his first sack with Arkansas' young ends. He took the moments immediately following the play, he said, to encourage Soli and others and tell them to remain hungry.

Arkansas linebacker De'Jon Harris said players aren't concerned with the defensive ends group despite Gerald missing the season with injury and Jamario Bell likely out for the second consecutive weekend - because of Richardson's leadership.

"Gabe has always been a vocal leader," said Harris, who finished with a season-high six tackles against the Rebels. "We don’t really have a problem with the way he’s leading those younger guys. Those guys came in ready to learn, so they looked up to Gabe from the jump."

Two weeks into his final season at Arkansas, Richardson is just three tackles away from matching his 2018 production. He already owns a career best in tackles for loss in a season with two and is third on the team in tackles with 10 behind only linebacker Bumper Pool (15) and strong safety Kam Curl (13).

"I just think Gabe knows it's his senior year and there's really not that much time he's got left," Harris said. "He's taking advantage of every opportunity that he's getting right now."

Richardson totaled three tackles, one tackle for loss, a pass breakup and quarterback hurry in the Razorbacks' second-half collapse at Colorado State last season. He is looking forward to matching up with the Rams' tackles again and being disruptive.

"They’re going to get our best. I hope they bring theirs."