Starkel anxious to fully take over the Arkansas offense 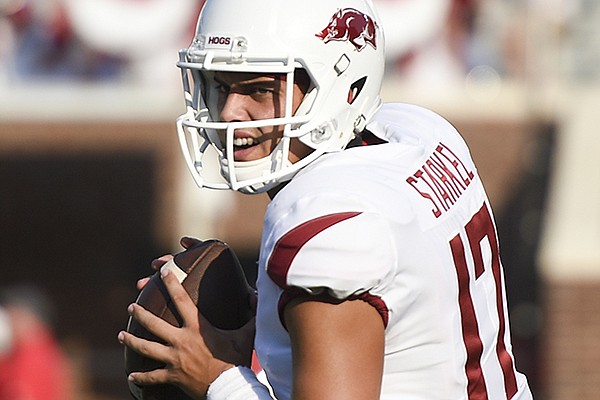 Arkansas quarterback Nick Starkel goes through warmups prior to a game against Ole Miss on Saturday, Sept. 7, 2019, in Oxford, Miss.

FAYETTEVILLE — During the preseason, Arkansas quarterback Nick Starkel said it was important for the starting quarterback to have a long leash and not be looking over his shoulder.

Now that Razorbacks coach Chad Morris has named Starkel the starter for Arkansas' game against Colorado State this weekend, it is not a surprise that he feels the same way.

“To me that just makes it a lot more easier going out there and I have a lot more confidence.”

Starkel, a Texas A&M graduate transfer with two years of eligibility remaining, was 17-of-24 passing for 201 yards with a touchdown pass after getting the nod to start the second half in a 31-17 loss at Ole Miss.

When told he was starting the second half, Starkel had a rather simple suggestion for Morris.

“‘Hey coach, let's get the ball out of my hands pretty quickly,’” Starkel said. “I want to get some passes in there, get the guys the ball and let them do something with it. We did that and it opened up the box. (Tailback) Rakeem (Boyd) had a couple of good runs in there. That's kind of what this offense can do when it really starts rolling.”

Starkel's last start was when he passed for for 499 yards in Texas A&M’s 55-52 loss to Wake Forest in the 2017 Belk Bowl. He admitted he liked taking a hit against SEC foe Ole Miss early in the second half.

“So being in the SEC as well, just made me feel like I was back in my spot,” Starkel said. “I like getting hit. The hits hurt a little harder in the SEC so I like that.”

He qualified that a bit.

“That’s part of the game,” Starkel said. “Shoot, if I carry out my run fake good enough they’re going to hit me every time. So that’s just part of the game and I understand. If I didn’t want to get hit, I wouldn’t play football.”

Starkel has completed 21 of 29 passes for 249 yards this season with one touchdown and one interception. He takes over as starter for Ben Hicks, who transferred from SMU prior to this season.

Hicks was named the starter in the preseason because of him being in Fayetteville for spring practice and having a better knowledge of the offense, but he is 21-of-45 for 241 yards with no touchdowns and no interceptions.

With his elevation to starter, Starkel has gotten increased reps in practice, but said he has approached the task at hand in the same way.

“I think it's the same preparation every week,” Starkel said. “Everyone in the QB room prepares as they are the starter. Obviously, there's a guy running with the ones and that's probably who is gonna start. But it's really the same preparation for me. I have a little more say in the game plan. That's really big for me.”

Starkel believes that this particular game plan will be effective for them.

“If you know something 100 percent you will be playing really fast rather than second guessing yourself - do I do this or do that?" he said. "That's what we're really look for this week, just really playing fast.”

That was not the case against Ole Miss on what was going to be a double pass, but ended with Starkel throwing it to the wrong side of the formation and the play getting blown up for a 14-yard loss.

It was a not a play that he had run in practice and he read the defense wrong.

“I take full responsibility for that,” Starkel said. “I didn't know the play that well. I called the protection wrong. (Running back Devwah Whaley) started to go the right way and I sent him the wrong way. And he listened to the quarterback. He did a great job on that even though he knew I was wrong.

“I wish he had told I was wrong, but everything is on me. I throw it to the wrong guy and it was a forward pass. I'm glad he (Mike Woods) didn't throw it, but it's still on me.”

Starkel's first Arkansas start will be a rematch from a year ago when Colorado State rallied from a 27-9 deficit in the third quarter to win 34-27.

“I know that was one they really shouldn't have let slip away,” Starkel said. “In the eyes of all the players, that's just what I've been hearing. This is important for us to settle things this game."

Starkel is impressed with what he has seen on film of the Rams (1-1).

“They're pretty solid,” Starkel said. “They return six starters this year. They are better than they were last year and they can really play some ball. We will get their best and it's gonna be good for us.

“They run a lot of one-high coverage. If they're gonna do that we've got some athletes to go make some plays let's go make it happen.”

“You’ve got some playmakers,” Starkel said. “When they know what they’re doing, I mean they’re on. So that’s the point of the game plan this week, is keep it simple with those guys so they can play full speed and just go make plays, like they’ve been making in high school and in college so far.”

“People better find a way to cover C.J (O’Grady),” Starkel said. “He’ll catch back-shoulder balls as you could see. He’ll go over the top of people. He’ll make plays. He’s a great kid to have out there.”