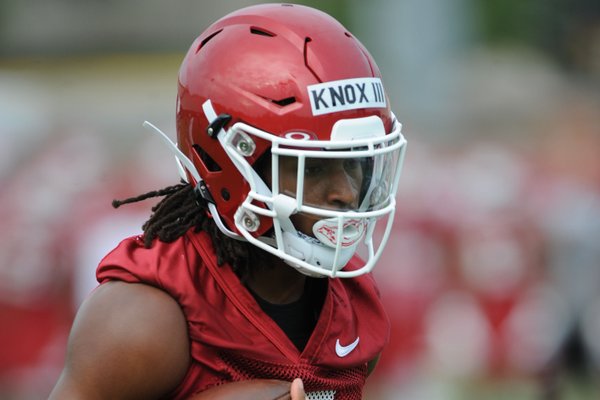 Arkansas receiver Trey Knox carries the ball Friday, Aug. 2, 2019, after making a catch during practice at the university practice field in Fayetteville. Visit nwad.com/photos to see more photographs from the practice.

Arkansas did thud work and went 1s vs. 1s and 2s vs. 2s in period No. 2 today. Here are the first team units and other notes:

• Just like last week during the open portion of practice, Colton Jackson (foot) and Austin Capps (left ankle) did not participate in this period, but both were involved in the offensive line group work. Capps, who did not travel to or play at Ole Miss, is hopeful to return to the field Saturday vs. Colorado State, Chad Morris said Monday.

• Trey Knox and Mike Woods were present at practice, but did not go through the thud work today. De’Vion Warren (hand) was present as well. He did not take part in the team vs. team work either.

• Connor Limpert and backup kicker Matthew Phillips finished each set of plays with a field goal. Limpert made his 47-yard kick, and Phillips missed his wide right.

• During the work between the 1s, Nick Starkel completed a pair of balls to tight end Cheyenne O’Grady for nice gains. He picked up 10-15 yards, I believe, on the first grab. He caught and weaved his way across the field before hopping out of bounds.

• Jamario Bell (knee) was not present at today’s practice. Morris added on Monday it is unlikely that the Junction City native plays this weekend against the Rams. He did not practice last week or travel with the team to Oxford.

Chase Harrell, who wore a green jersey during the open portion of practice on Tuesday of last week and was not present Wednesday, wore green again today. He appears to be favoring his right shoulder. After running a route and catching a pass on air, he doubled over and had a trainer check on him for a moment. He was the only player in green.

WR Jordan Jones (high ankle sprain; out around another week)