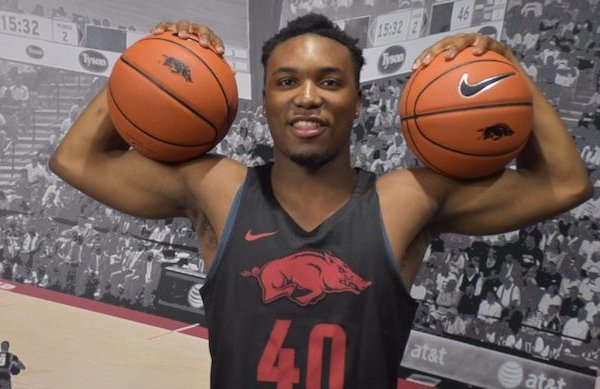 FAYETTEVILLE — The resolution of where West Memphis four-star senior basketball prospect Chris Moore is going to play basketball will not likely take place until this spring.

Moore (6-6, 220), a top-100 player nationally who is slated to visit the Razorbacks officially on Sept. 20-22, wants to take his time and concentrate on his senior season.

“I am going to take my visits, but I am not planning on signing until the late period (April 15-May 20),” Moore said. “I want to concentrate on my biggest goal this season and that is helping my team win a state championship.”

Moore narrowed his lengthy list of suitors to 14 this summer, but is planning on taking five official visits to Arkansas, Memphis (Oct. 2-4) Iowa State, Auburn and Texas A&M.

“I will likely announce a final five in late October or early November, but those are the visits I have confirmed right now although I don’t know the dates on Auburn and Texas A&M,” Moore said. “My brother (West Memphis assistant coach Alvin Hawkins) is handling all that.”

He had home visits Monday with Memphis coach Penny Hardaway and Arkansas coach Eric Musselman, who no doubt would love to sign him in the November 13-20 early signing period.

“I had a great visit with coach Musselman and he had a lot of things to say about the type of player I would be for him and how he could get me ready for the league.

“Most coaches think I am going to be a two- or three-year player in college and talk about how they can develop me during that time.”

“He talked a lot about how I play a lot like him and how he came in and they didn’t know if he would play a lot early, but he had a great work ethic and turned himself into a great player,” Moore said. “He thinks I have that same work ethic and that I can be that type of player as well in college.”

Moore averaged 17.7 points, 6.1 rebounds, 1.3 assists and 1.1 blocks per game for 17-under Woodz Elite during the Nike EYBL regular season this spring and summer while shooting 66 percent from the floor.

Arkansas and Memphis have long been thought to be the leaders for Moore, who admits he gets a lot of advice on where he should go.

“I have a lot of people telling me I should go to Arkansas because there are a lot of Razorback fans over here and I also hear from a lot of Memphis fans because it is so close,” Moore said. “I just try to smile and say thanks.”

Moore has learned a lot since playing his first high school game as a ninth grader, including how quickly things can change with programs.

Arkansas and Memphis have both changed head coaches since the schools first started recruiting Moore.

“That’s been something to process along the way,” Moore said. “A coach and his staff may be there one day and not the next for many reasons. That’s why I have to be sure about the program overall and that it is the place I want to be. It’s why I am taking my time to be sure I make the right choice.”