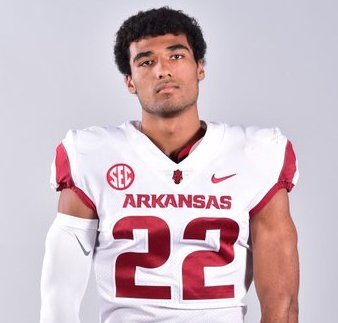 One of the top junior prospects in Texas plans to return to Arkansas for another look in the near future.

Running back Jordan Jenkins, 6-1, 200 pounds, of Lindale, Texas, visited Fayetteville on March 9 and during June. He has plans to visit again for the San Jose State game on Sept. 21.

“I’m really looking for the style of the offense and how they play and execute,” Jenkins said. “Also, the players, how they play and act in different situations on each side of the ball. I’m hoping to come out with a good vision of if I’m playing on the field would I fit in with the program.”

He turned in a strong sophmore season with 1,504 yards and 17 touchdowns on 273 carries for the Eagles, earning first team all-district honors.

A team captain for the 2019 season, Jenkins has offers from Arkansas, Baylor, Brigham Young and Louisiana-Monroe. The Razorbacks offered him in January.

“Mostly congratulating me and telling me good luck on games,” Jenkins said of the discussions.

Morris is the lone head coach who is recruiting Jenkins.

“It shows the importance that not only the recruiting staff, but the coaches as well, reach out to me. I appreciate that a lot,” Jenkins said.