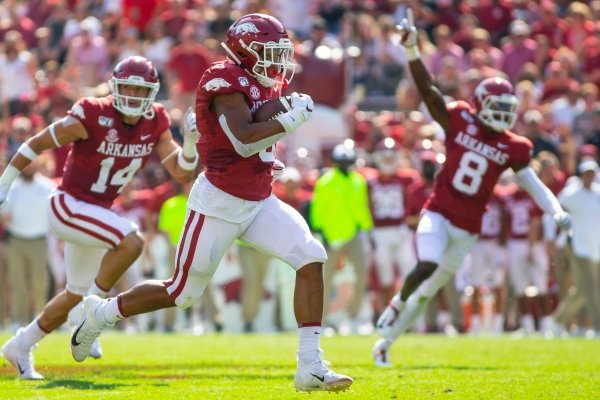 Rakeem Boyd on the way to the endzone fo score a touchdown during a football game, Saturday, September 14, 2019 at Donald W. Reynolds Stadium in Fayetteville, AR.

In the final analysis, the play calling couldn’t have been more balanced in the University of Arkansas’ 55-34 win over Colorado State on Saturday.

On first downs, the Razorbacks threw 18 times and ran 14.

Arkansas’ most conservative quarter was the third, when it ran on first down to start each possession

That should have been enough to keep the Rams defense off balance, but when they tied the score 34-34 with 2:26 to play in the third quarter, it was anyone’s game.

After the game, two ladies wearing Rams T-shirts were sitting on a concrete slab. They were resting before taking on the big hill on Razorback Road across the street from Reynolds Razorbacks Stadium.

“I don’t see why people live here,” one of them said. “I can’t catch my breath.”

No doubt, the humidity helped the Hogs.

Like the thin air did to the Hogs last year in Fort Collins, the humidity wore out the Rams in Fayetteville.

In the final quarter, the Hogs offense scored two touchdowns — the defense added one on a scoop and score — and had 140 yards of offense, 62 of which came on a catch and run by Cheyenne O’Grady.

Going into that final period, the Rams were averaging 7.2 yards per play. In the final quarter, they averaged 2 yards per play. The Rams offense was on the field for more than 10 minutes of the third quarter.

That’s not taking anything away from the Razorbacks’ offensive effort.

Let’s get this out there: The Hogs needed the win, and their fans deserved it.

Fans expect to be entertained for the kind of money they shell out to attend, and Saturday turned into an entertaining game — at least in the first and fourth quarters.

Nick Starkel ended up 20-of-35 passing for 305 yards, but the vast majority of that came early and late.

His performance left a lot of people asking why he did not start against Ole Miss.

Against CSU, Starkel looked like the SEC quarterback he proved to be at Texas A&M.

The Razorbacks should at least win all four of their nonconference games, which isn’t a feather in their cap but is twice as many wins as last year.

The main thing is they need to keep improving. It may be hard to tell anything this Saturday against 1-1 San Jose State, but that’s the perfect game for the defense to practice containing and tackling.

Those may be the biggest concerns after three games.

Bruce James was an All-American defensive end for the Razorbacks, and it is impossible for him to mention his wife Barbie without saying he’s the luckiest man in the world because she married him.

Now, they are looking for a little more luck.

Bruce has lost a ring that Barbie made him as a wedding gift in 1972. The ring has a football on top and his name inside.

He last remembers having it at Walmart off Arkansas 10 in Little Rock.

Excuse my mistake Sunday. The expansion to Razorback Stadium was budgeted for $160 million, but the cost went over that.