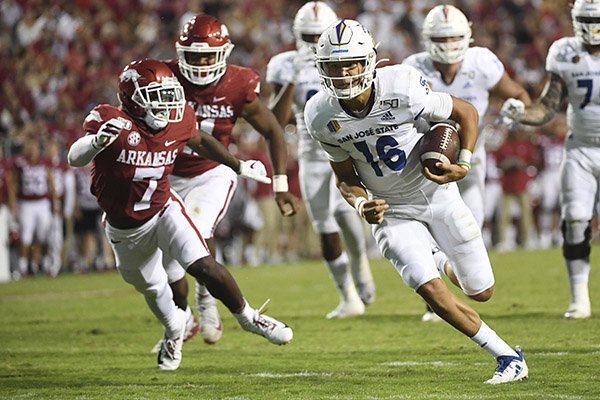 San Jose State quarterback Nick Nash gets past Arkansas defender Joe Foucha to score a touchdown during the first half of a college football game, Saturday, Sept. 21, 2019,in Fayetteville. (AP Photo/Michael Woods)

The University of Arkansas (2-2) never led and gave up the winning touchdown on DeJon Packer’s 19-yard touchdown run with 1:13 left in the game in a 31-24 loss to San Jose State on Saturday night at Reynolds Razorback Stadium in Fayetteville.

Down 24-7 at the half, the Razorbacks rallied to tie the game with 2:56 left, but it took the Spartans just five plays and under two minutes to go 75 yards for the winnings score.

Arkansas QB Nick Starkel threw five interceptions, including the game clincher on a heave downfield with about a minute remaining. He finished 28-of-49 passing for 356 yards, 3 TDS and the 5 INTs.

The Hogs moved 44 yards on their first possession of the second half, but Starkel threw over Cheyenne O’Grady’s head on third and 8 from the San Jose State (2-1) 31 and was intercepted by Jay Lenard.

San Jose State moved to midfield and had a fourth and 1, but a completed pass fell short of the marker as Arkansas took over with 10:45 left in the third.

The Razorbacks showed life, as Starkel connected with Trey Knox for 19 yards and Devwah Whaley for 22 yards to the Spartans’ 13. On third and 5 from the 8, Starkel threw his fourth interception of the game in the end zone, and San Jose State ran the ball to its own 14 with 8:26 left in the third.

The Hogs held on three downs, and took over at their own 47 after a fair catch on the punt.

Rakeem Boyd caught a pass for 8 yards, then ran for 12 yards to the San Jose State 35. On fourth and 4 from the 29, Hogs Coach Chad Morris called upon Connor Limpert for a 48-yard field goal, which was down the middle to cut the deficit to 24-10 with 5:01 left in the third quarter.

The Spartans moved to the Arkansas 20, but 20 yards of penalties led to a punt and touchback with 1:19 left in the third quarter.

The Hogs faced a fourth and 1 from their own 29 on the first play of the fourth quarter, but Whaley picked up 16 yards on a misdirection pitch for a first down. Then on first and 10 from the San Jose State 30, Starkel hooked up with Tyson Morris for a touchdown pass to cut the deficit to 24-17 with 13:10 remaining.

San Jose State registered two first downs on the next possession, but a big drop on third and 5 from the Hogs’ 46 resulted in a punt and Arkansas taking over at the 20 with 10:31 remaining. Three downs netted 7 yards and forced the Hogs to punt.

The Spartans took over at their own 44, but they faced a second and 18 after a holding penalty. A 13-yard pass to Tre Walker got them close to a first down, and defensive pass interference call on the Hogs moved them to the Arkansas 36.

On third and 7 from the Arkansas 34, the Spartans passed incomplete. The punt ended in the end zone for a touchback, and Arkansas took over at its own 20 with 5:51 remaining.

Boyd opened the possession with an 18-yard burst, Starkel hit Knox for 17 yards and an unsportsmanlike conduct penalty on San Jose State moved the ball into Spartans’ territory.

Starkel connected with Mike Woods for a 40-yard reception to set up first and goal from the 10. On third down, Starkel found Knox for an 8-yard touchdown to tie the game at 24-24 with 2:56 remaining.

In the first half, quarterback Josh Love connected with a wide-open Bailey Gaither for 50 yards on the Spartans’ first play from scrimmage, and six plays later they had a 7-0 lead after Love found JaQuan Blackwell for a 3-yard TD pass less than three minutes into the game.

Arkansas went three-and-out on its first possession, but the Hogs’ defense responded with a quick stop.

The Razorbacks picked up four first downs on their next possession, but on fourth and 2 from the San Jose State 4, Whaley was stopped for a 2-yard loss to turn the ball over on downs.

Love responded by connecting with Tre Walker and Isaiah Holiness on two passes for a combined 42 yards to move the ball near midfield. On third and 8 from the Arkansas 48, Love hit Walker again for 15 yards and a first down. The drive bogged down thanks to a pair of 5-yard penalties on the Spartans, and Matt Mercurio’s field goal was wide right with 2:25 left in the first quarter.

Starkel found Knox for 17 yards, but a holding penalty set up a second and 17 from the Arkansas 38. That was no problem for Starkel, who found Mike Woods in stride for a 62-yard TD to tie the score 7-7 with 1:07 left in the quarter.

Kamren Curl picked off Love’s pass to set up the Hogs at their own 34 prior to the end of the quarter, but Starkel returned the favor three plays by throwing an interception to Ethan Aguayo that was returned to the Hogs’ 28. Two running plays later led to a Rico Tolefree 15-yard TD for a 14-7 San Jose State edge with 14:18 left in the second quarter.

The Razorbacks responded with a 14-play drive, but Boyd was stopped for 1 yard on third and 2, and Starkel was stuffed on a keep on fourth down at the San Jose State 23 with 8:21 left in the half.

Thanks to completions of 14 and 15 yards and a defensive pass interference penalty on the Hogs, Mercurio was set up for a 47-yard field goal for a 17-7 San Jose State lead with 6:09 left in the first half.

Arkansas gained 4 yards on its next possession before punting, and the Spartans took over at their own 20.

The Razorbacks spent the Spartans next possession chasing their foes with no success. On third and 10, Walker caught a short pass, reversed field a couple of times, broke a couple of tackles and gained 20 yards for a first down. The Spartans took a 24-7 lead when Love threw a swing pass to Holiness, who didn’t have a Hog within 10 yards of him when he caught the pass before taking it 26 yards for the touchdown with just over a minute before the half.

Starkel threw his second interception before the end of the half.