How Arkansas and San Jose State compare at each position 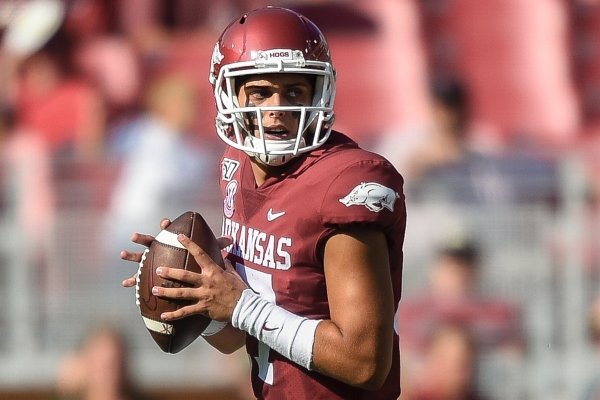 The Spartans are led by a pair of seniors on the left side in LT Jackson Snyder and LG Troy Kowalski, and grad transfer RT Quinn Oseland, a 6-6, 305-pounder. Junior C Kyle Hoppe and Sophomore RG Tyler Stevens are the other projected starters. The unit averages 6-4, 297 pounds. San Jose State is allowing one sack per game.

The Razorbacks are coming off their best game in a long time, led by junior C Ty Clary, who made the Pro Football Focus national team of the week. LT Colton Jackson and LG Austin Capps are settling in after being slowed by camp injuries. RG Ricky Stromberg has impressed while battling through mistakes beside RT Dalton Wagner. Myron Cunningham is the top backup.

The Spartans are 89th in punting. Senior Alex Galland has put 6 of 8 punts inside the 20. He averages 40.2 yards per punt to rank 63rd. Field goal man Matt Mercurio is 1 for 2 on FGAs, making one from 22 yards and missing from 42, and is 6 of 6 on PAT. Brandon Ezell’s only punt return went for 25 yards. The Spartans are 58th with a 21.3-yard kickoff return average.

San Jose State has the benefit of two weeks to prepare for this game thanks to an early open date. However, there’s nothing the Spartans could do to simulate the humidity they’ll face in this game, which probably won’t be of the full-scale variety. The Spartans will have to execute on a very high plane to have a shot at the upset.

How do the Razorbacks respond to the first big dose of momentum they’ve had in more than a year? If the execution can become more crisp in the second week with Nick Starkel as the starting QB, the Hogs can make big advances. The celebrated signing class on defense should get an opportunity today with injuries on all three levels, but particularly at linebacker and end.