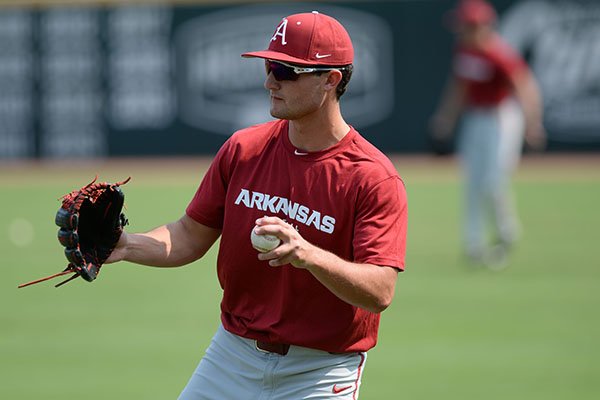 FAYETTEVILLE — The two worst injuries that can befall a pitcher are to the throwing elbow or shoulder.

Either injury can set back a pitcher for months, if not years, and sometimes the injuries are severe enough to end careers.

Arkansas redshirt sophomore Hunter Milligan is familiar with both injuries. The left hander has had surgeries to correct both since the fall of 2017 and has only pitched in three college games.

Milligan is back with the Razorbacks this fall after staying in his hometown of Greenbrier to rehab from the second surgery, Tommy John, the past year. It’s safe to say it has been a much different path than envisioned for Milligan, who at the time he committed to Arkansas as a rising high school senior three years ago was rated the No. 7 recruit in the nation by Perfect Game.

“It’s like a kick in the gut when you get two surgeries in a year,” Milligan said. “It is what it is, and you can’t do anything about it now. You’ve just got to keep on moving.

“A little adversity don’t hurt you, that’s for sure.”

Milligan injured his shoulder throwing for Greenbrier during Spring Break of his senior season in 2017. He didn’t pitch anymore that season, but continued to play through the discomfort as a designated hitter. It wasn’t until he arrived on campus in Fayetteville that fall that he had the shoulder operated on.

He was cleared to pitch by the preseason of his freshman season at Arkansas. He had three relief appearances in the first month and allowed two earned runs in four innings.

Milligan didn’t pitch in a game after a midweek series against Texas in mid-March, but continued to throw in practice. It was while at the SEC Tournament in Hoover, Ala., that year that he felt the dreaded pop in his elbow.

James Andrews, the renowned orthopedic surgeon, operated on the injury in Pensacola, Fla., that July. The surgery revealed an 80 percent tear to his ulnar collateral ligament.

Ultimately Milligan decided to keep pursuing the game. Once he was cleared to begin throwing he began working out with Dustin Moseley, a former MLB pitcher who owns a training facility in Little Rock and who had multiple arm surgeries during his own playing career.

“We developed a program that kind of used more volume than intensity to build (the elbow) up,” Milligan said. “I would definitely say that’s what helped me come back. I probably threw for four or five months before I ever got on the mound, just playing catch.”

Arkansas pitching coach Matt Hobbs has been around college baseball for two decades. He can only remember one other instance when a pitcher had the same combination of surgeries as Milligan.

“He never came back to anything close to what Hunter is right now,” Hobbs said. “He’s in uncharted territory for a lot of people. I know it happens and a lot of guys have had this issue, but from what I’ve seen he looks to be what he was before the injuries, which is really unusual.”

Milligan faced live hitters for the first time since surgery on Sept. 8 in the Razorbacks’ second intrasquad scrimmage of the fall practice season. Milligan pitched a scoreless inning and worked around a walk.

When he came off the mound he was greeted by Hobbs and Arkansas coach Dave Van Horn, who both shook his hand. He received a warm greeting from his teammates in the dugout. It was the first time he had thrown to a live batter in nearly 18 months.

“It’s a huge moment,” Hobbs said. “You have empathy for anybody who has been through it, through that long of a road to get back to where he is now.”

Hobbs knew of Milligan because of his profile as a high school pitcher, and he had watched Milligan pitch while scouting for Wake Forest. Hobbs recalls Milligan’s name being brought up about midway through last season when “there were some rumblings that he was trying to come back and was rehabbing really hard.”

Milligan and Hobbs spoke this summer, and Milligan said he felt “really good” about his bullpen sessions with Moseley. When he returned to Fayetteville, Milligan threw a bullpen session for Hobbs and hit 90-92 mph on the radar gun. He had only been throwing off the mound for about two months.

“I saw his first bullpen this fall,” Hobbs said, “and I was like, ‘Man, you weren’t kidding.’

“It’s been a really nice surprise.”

Milligan struck out three batters in one inning of work during Friday's exhibition game against Oklahoma. Van Horn called the difference in Milligan "night and day."

"He’s in great physical shape, trim as I’ve ever seen him," Van Horn said. "The ball is jumping out of his hand. He threw really well tonight and he’s going to help us."