Spartans cash in on Power 5 Hogs 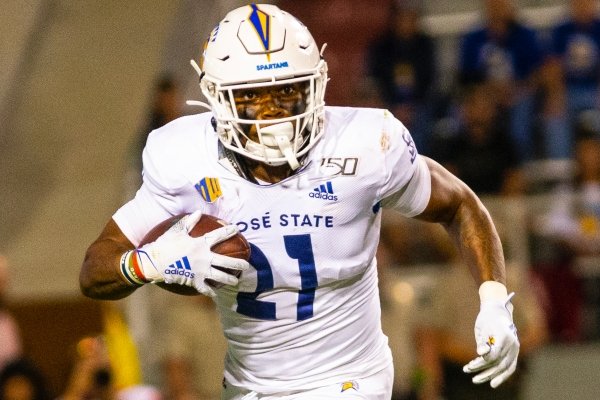 FAYETTEVILLE -- Prior to Saturday, San Jose State had been 0-6 against SEC opponents and lost by an average of 35.6 points.

But the Spartans never had played the Arkansas Razorbacks, especially the recent version.

SEC teams to beat the Spartans six times between 1991 and 2015 were Alabama, Auburn (twice), Florida (twice) and LSU -- all programs currently ranked in The Associated Press top 10.

Arkansas hasn't been in the top 10 since the Razorbacks were No. 8 and suffered a 34-31 overtime loss to Louisiana-Monroe in 2012 in Little Rock.

That loss was the beginning of what has become a 36-54 stretch for the Razorbacks. Excluding victories over FCS teams, the Razorbacks are 29-54 since the Louisiana-Monroe loss.

San Jose State is now 1-6 against the SEC.

The Spartans flew back home to California with a 31-24 victory over the University of Arkansas at Reynolds Razorback Stadium along with a $1.5 million guarantee for agreeing to play the UA.

At least when Arkansas lost at home to North Texas 44-17 last season, the Mean Green's guarantee was only $1 million. That's also the guarantee Arkansas paid Toledo in 2015 when the Rockets beat the Razorbacks 16-12 in Little Rock.

Tennessee paid Georgia State a $950,000 guarantee when the Panthers beat the Vols 38-30 to open this season.

According to ESPN, Arkansas has paid the highest guarantee for a game it lost this season, surpassing the $1 million Eastern Michigan received for its 34-31 victory at Illinois.

Arkansas (2-2) fell to 1-2 against Mountain West teams the last two seasons, along with a split against Colorado State. The Razorbacks beat the Rams 55-34 on Sept. 14 at home after losing to them 34-27 last season on the road.

The Razorbacks were attempting to win back-to-back games for the first time since 2017 -- when they won at Ole Miss and beat Coastal Carolina at home -- against San Jose State. They came into the game as a 20-point favorite against the Spartans, who had been 4-23 since 2017, including a 34-16 home loss to Tulsa this season.

"We had an opportunity to capture some momentum at home," Razorbacks Coach Chad Morris said. "So unacceptable. Just very disappointed."

Nick Starkel's five interceptions were the most thrown by a Razorback since Wade Hill had five in the 1991 Independence Bowl when Georgia beat Arkansas 24-15.

"That was uncharacteristic. He didn't do that the week before. But it wasn't just that. We've got to keep him clean, too."

"We have to be effective running the football," Morris said. "We threw the ball 50 times and that's entirely too many."

The Spartans gained 503 yards, including 402 passing by quarterback Josh Love. He completed 3 of 3 passes for 54 yards on the game-winning drive when San Jose State went ahead 31-24 with 1:13 left.

"You get what you deserve in life and we didn't deserve to win this football game," Morris said. "We had five turnovers, and you allow a guy to throw for over 400 yards on you and go down the field on you like nothing."

Arkansas rallied from a 24-7 halftime deficit to tie the game 24-24 on Starkel's 8-yard touchdown pass to Trey Knox with 2:56 left.

"I love the fight," Morris said. "We come back and tie the game and here we go. I really thought, as bad as we played we're fixing to win this football game. And we couldn't finish it."

The Razorbacks, who lost 31-17 at Ole Miss in their SEC opener, resume conference play against No. 23 Texas A&M (2-2) on Saturday at AT&T Stadium in Arlington, Texas.

"We're going to go back in there and we're going to work," Arkansas linebacker Bumper Pool said. "We're not going to quit. This was just game four. We've got a lot of football left."

Morris, asked if the Razorbacks could have been overlooking San Jose State and ahead to Texas A&M, said he was concerned in pregame warmups that his players were too loose and giddy.

"Personally, I felt like I was ready for the game, but I understand," Starkel said of Morris' comments. "He came up and he talked to us, and he said that there were a couple of guys that were just messing around, might not have been ready to play ... Obviously, San Jose State, they were ready to play and they showed up from the first snap."

San Jose State had a 50-yard pass play on its first snap.

"It's a gut-check time now," Morris said. "We're going to find out a lot about ourselves this week."