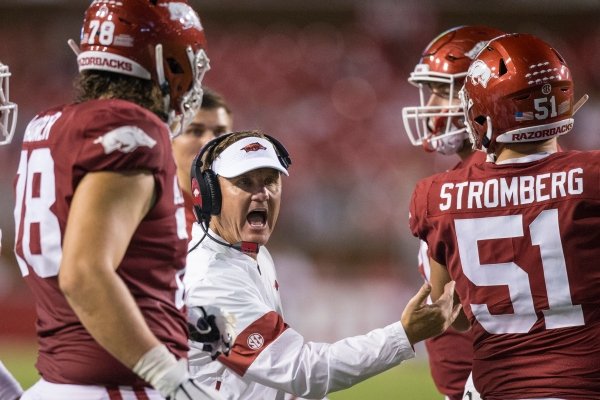 FAYETTEVILLE -- A somber Chad Morris and University of Arkansas coordinators John Chavis and Joe Craddock did more reflecting than projecting at their weekly news conferences Monday.

It works that way after a stunning loss like the 31-24 setback inflicted on the Razorbacks by three-touchdown underdog San Jose State on Saturday.

The Razorbacks are 2-2 and staring at the meat of their SEC schedule for the next month and a half, starting Saturday against No. 23 Texas A&M in Arlington, Texas.

Morris responded to a question about what his message was to the fans.

San Jose State was named the national team of the week by the Football Writers Association of America for its upset of the Razorbacks.

The Razorbacks allowed 503 total yards, including 402 passing yards, to a San Jose State offense that had averaged 365 yards per game while splitting home games against Northern Colorado and Tulsa.

"There's not a whole lot I need to say, other than the fact we're disappointed," said Chavis, the defensive coordinator. "Obviously we didn't get the job done. Obviously the other team was better prepared. We came out, and I know you're wondering how does it happen, and I am too.

"We give up a big play to start the game. We're going to find a way to get it fixed. I don't have an answer right now at this point, but it's coming. We've got to play much better, and we're capable of playing much better."

Later, Chavis implied the Razorbacks have to practice better on defense.

"As I say, and I'm not making excuses for anybody, but that goes back to what you get done in practice. You know, we're sitting here through four ball games, and I'll be honest with you, it's a frustrating situation for our head coach to look at our defense. It's frustrating for me because we need to be playing better.

Craddock, when asked about his assessment of Saturday's performance, dove right in.

"Pretty embarrassing," he said. "You know it took us a whole half to decide to play a little bit, and that's on me. That's on our coaching staff.

"We've got to make sure our guys are ready to play from the first snap to the last snap. And we weren't. That falls directly on me, and we've got to get that right."

Craddock suggested starting quarterback Nick Starkel and the whole unit began to press after the Razorbacks fell behind 24-7 by halftime.

"And when you feel like you're better than a team, you've just got to go out and execute," he said. "You've got to stay within the system, and I've got to call better plays and we've got to execute. That's what it's about."

Craddock was asked about why the offensive line struggled after a strong showing the week before in a 55-34 victory over Colorado State.

"I think that's something to ask them," Craddock said. "I thought they played pretty well against Colorado State, and not so well the other night. I don't know what it was. I really don't.

"I think that is something you'll have to ask them. I honestly felt like Colorado State's defensive line was better than San Jose's, and obviously we didn't go prove that in the game."

The Razorbacks will enter the Texas A&M game as a three-touchdown underdog. The Aggies have won seven in a row in the series, with four by seven points and three in overtime.

Morris said he did not catch on to anything in practice last week that would indicate a dud performance Saturday. He later added the Razorbacks are still in a building mode.

"As I mentioned before, it's not a ... finished product," he said. "It's not. And it is a continuation of building this program, and sometimes when you have to build it you have to go through some really tough times, and right now is one of those times. And you learn from it, and you move on."

Morris thinks the Razorbacks will perform better against Texas A&M.

"The only thing we can do is go back to work and that's what we're doing," he said. "That's everybody. That's every coach. That's our players back in here last night.

"Our total focus is on getting this football team prepared and equipped and ready to go for this Saturday and to respond in the way that I know they can respond. Our backs are against the wall, and we're going to find out a lot about ourselves in all areas."