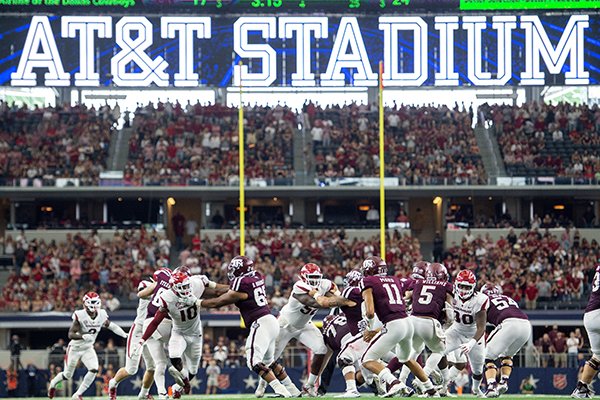 Despite four SEC teams being off this week, there are some quality games, although home teams seem to have a real advantage.

It’s a big game for Arkansas State University, as the Red Wolves open Sun Belt play at Troy searching for a new quarterback.

Went 8-2 last week and wasn’t surprised at one of the losses, Auburn beating Texas A&M. The other was a shocker bringing the season record to 36-11.

The Aggies and the Hogs are 2-2 overall and 0-1 in SEC play, but the Aggies losses were to No. 1 Clemson and No. 7 Auburn. The Razorbacks losses were to unranked Ole Miss and San Jose State, which is why the Aggies are 23 1/2-point favorites. One slight advantage for the Razorbacks is quarterback Nick Starkel practiced against the Aggies defense every day for two years. The Hogs need to play a perfect game, and the Aggies have lots of penalties and turnovers. Texas A&M 31-17

Looks like Layne Hatcher at some point will be baptized under fire as the Red Wolves’ new quarterback. ASU is on the road at Troy where the Trojans are 2-1, and the wins were expected. Don’t expect Hatcher to be too rattled playing on the road. He’s mentally tough and is as hard to tackle as any quarterback in the country. Blake Anderson has found a way to put his team in front of his grieving. Arkansas State 31-24

Not really sure how this got to be the 2:30 p.m. game on CBS unless it was the whining by the Crimson Tide at having to play at 11 a.m. last week. The Tide really do think they are too good for a morning game. The Rebels come into the game undefeated in SEC play but barring a miracle won’t leave Tuscaloosa that way. Have to say, the Rebels got hosed by the Pac-12 officials in their loss to Cal. Do not expect Nick Saban to be happy with this game despite the final score. Alabama 42-17

The Bulldogs got a huge win over Kentucky last week. They seem to have gotten all or most of their suspensions out of the way but will face the best defense it has seen this season. The Tigers are looking for payback after losing to the Bulldogs 23-9 last season. No matter what, the Tiger fans will find fault with Gus Malzahn. Auburn 28-14

The Tigers are coming in off a loss to Villanova (at least it was on Johnny Unitas Field), and the Gators are finding a new and better stride with their backup quarterback. This game is a money game, and it is doubtful the Tigers can sneak up on the Gators unless Florida is thinking about Auburn next week. Florida 42-21

Someone’s bowl dreams are going to take a huge hit. Both are 0-2 in SEC play, and while the Wildcats are 2-2 overall, they are not showing the firepower of last season. It is highly doubtful they will looking ahead to their next opponent, Arkansas (both have an open date next week). The Gamecocks have been rocked with injuries and Will Muschamp’s seat is getting a little warm. South Carolina is at home, and their fans don’t care about records. It is a major sporting event for them every time the Gamecocks play. South Carolina 24-21

The Huskies had an open date after a 44-8 loss to Nebraska. The Commodores scheduled this game for a win, and while it might not be easy, Vandy should be able to get its first victory of the season. Vanderbilt 28-17