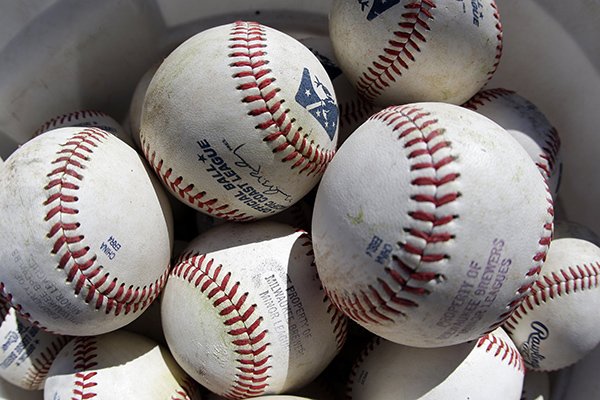 Sam Golden was in position to become a late-round pick in this year’s Major League Baseball Draft.

The Bentonville senior catcher could have chosen to honor his national letter of intent to Central Missouri anyway, but baseball is on hold at every level because of the coronavirus pandemic. The format and timing of the draft is also in question.

That likely limits the opportunities for players such as Golden, said Todd Abbott, his high school baseball coach. He said Golden’s skills behind the plate are strong, but he could use some work offensively.

Golden likely won’t get a chance to show off his skills in the spring after Gov. Asa Hutchinson announced Monday that schools will remain closed to in-school instruction for the remainder of the school year. That portends that the Arkansas Activities Association will follow suit and cancel spring sports.

It may not matter anyway, said Darek Braunecker, co-owner of Little Rock-based Frontline Athlete Management. It’s his belief that if there is no professional baseball at all this season, the MLB Draft will be only five rounds. It likely will be longer if baseball is played, he said.

“We’re hopeful at some point the restrictions will be lifted and we can get back to baseball,” said Braunecker, who formerly represented Arkansans Cliff Lee and A.J Burnett and currently represents Tampa Bay Rays pitcher Jalen Beeks of Prairie Grove among other clients. “It’s anybody’s guess when that will be.

“There’s a certain segment that won’t be impacted by a limited draft. The Casey Martins and the Heston Kjerstads of the world should be fine.”

Martin and Kjerstad are University of Arkansas players who are eligible for the draft.

Major League Baseball and the players’ association agreed recently to make the draft no shorter than five rounds. It could be held as early as June 10 or much later.

Abbott — who pitched at Arkansas and was drafted multiple times, advancing as far as Class AAA — said the pandemic at the very least cost Golden a chance to move up draft boards.

“Heading into the spring, he was on some people’s radar,” Abbott said. “He was a late-round guy with the potential to move up in that sense. Defensively, he could step in and catch really anywhere in the collegiate setting. Offensively is where he needed to improve, but if he had a really good spring, that would have determined the level of interest and what round.”

Abbott — whose father, Glenn, pitched for 11 seasons in the major leagues and has been a minor-league coach for more than 25 years — said the pandemic likely will have a huge effect on college baseball next season, especially after the NCAA last week granted an extra year of eligibility to spring sports athletes.

“There will be an influx of kids like Sam Golden who may have had a chance to go mid- or late round,” Abbott said. “They will go to college. The college game has been really good, but I think it’s going to get even better.”

Braunecker supports a shorter draft than the customary 40 rounds.

“I’m for that anyway,” he said. “I think we spend too much time, money and energy evaluating those drafted after the 10th, 15th or 20th round. It’s just to fill rosters. Those kids should go to school. It’s not like 20 years ago when college baseball was a fallback.”

He used Arkansas as an example of how some colleges are doing as good of a job at producing Major League Baseball-ready players as minor-league teams.

“Those kids are better served growing under the guidance of Dave Van Horn, rather than bouncing around the minor leagues for three or four years,” Braunecker said.

Dan Wright, a former Arkansas Razorbacks pitcher and current scout for the Philadelphia Phillies, said a draft would present new challenges for the clubs.

“You can’t draft what you can’t see,” said Wright, who pitched in four seasons for the Chicago White Sox and has been a scout since 2007. “The clubs that are leaning on analytics probably don’t have enough data based on this year. Those that lean more on scout’s eyes may have an advantage this year.

“I think all clubs are using it to some degree, some heavier than others. It will be interesting. The more data you have, the more accurate it is. The less data you have can really skew things.”

Randy Flores, assistant general manager and scouting director for the St. Louis Cardinals, agreed that evaluating players from a small sample size will be more difficult this season.

“Each player and situation is different each year, but the blend of science and art will be even more difficult than usual in the 2020 draft,” Flores said. “The simplest answer is that navigating signability will be even more important. But there are a whole host of issues to work through.”

He said the effects will be more clear further down the road.

“We will likely not learn the ramifications for years, until drafted [or passed over players] ultimately make their way through professional baseball,” Flores said. “That being said, in the near term, in a normal year draft picks are made in the absence of perfect info … and that is only more true now than ever.”