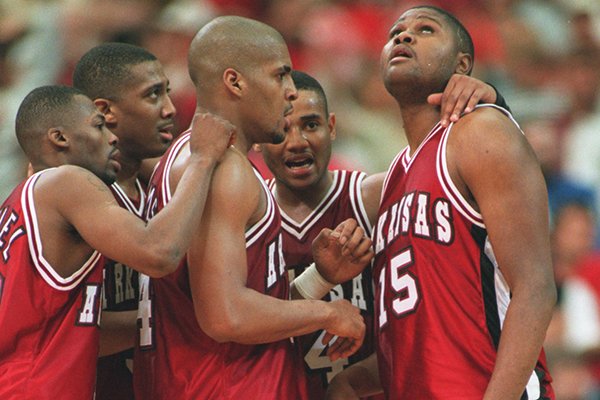 Like discussing who would have won the canceled 2020 NCAA Basketball Tournament, voting in the Arkansas Democrat-Gazette’s online Razorbacks NCAA bracket is subjective.

For several days, readers have voted on which of the 28 University of Arkansas teams that made the NCAA Tournament would have fared against each other.

Voting for the semifinals continues through Friday at arkansasonline.com/uabbbracket.

The four left standing are not a surprise.

Three were coached by Nolan Richardson and one by Eddie Sutton. Both coaches are now Naismith Basketball Hall of Famers.

They also are the most instrumental basketball coaches in Razorbacks’ history.

Sutton laid the foundation, and Richardson added a championship level to the program.

Richardson’s 1989-90 team put the Razorbacks back on the national radar.

Sutton’s 1977-78 team beat UCLA in the NCAA Tournament, and that was a statement heard nationwide.

Three of the four remaining teams made the NCAA Final Four, and the other reached the Elite Eight.

One semifinal pits Richardson’s 1993-94 national championship team against the 1994-95 national runners-up, which is basically the same team.

The starting five is the same. The 1994 team beat Duke to win Arkansas’ only national basketball championship, and the 1995 team lost to UCLA in a bid for a repeat.

The bracket game is free, fun and wrapping up fast.

We wore masks for visits to Walmart and Kroger recently.

It was an essential visit.

Yet, we couldn’t get out of there fast enough as too many people were unprotected, talking on their cellphones and ignoring the 6-foot social distancing rule. Less than half wore masks.

As we pulled in the driveway at home, the thought “six or six” came to mind. People can choose to stay 6 feet away from other people or run the risk of contracting covid-19 and being put 6 feet under.

After you unpack your groceries, immediately wash your hands.

From the category of unsurprising news, it was reported recently that new Mississippi State football Coach Mike Leach had posted a meme on Twitter that offended some.

Enough so that defensive lineman Fabien Lovett has decided to transfer. His dad was quoted as saying he wasn’t comfortable with his son being under that type of leadership.

Lovett was on the First-Year SEC Academic Honor Roll, and a force as a sophomore last season on the field.

It is easy to understand why Leach left Washington State for MSU. He seems to wear his welcome out in a few years at his schools.

He’s an extremely intelligent coach, but he gets caught up in off-the-field events that sometimes — at least according to a story that quoted 10 of his former quarterbacks — takes away from game preparation.

When Bobby Mitchell graduated from Langston High in Hot Springs, his only choice to play college football in Arkansas was Arkansas AM&N in Pine Bluff. Tuesday’s column said Arkansas A&M, which was in Monticello.