On this date in Razorback history, April 8 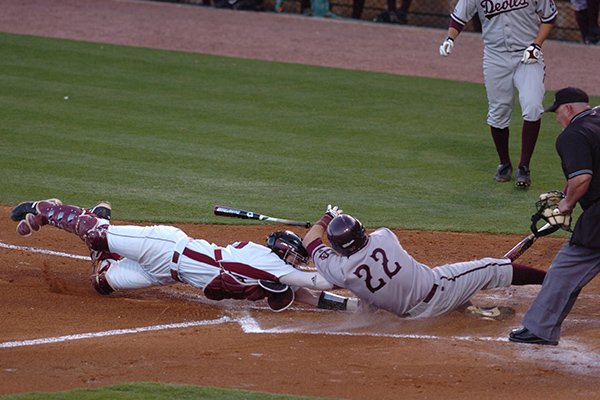 Arkansas catcher James McCann tags Arizona State base runner Jared McDonald (22) at the plate for an out in the second inning of a game Wednesday, April 8, 2009, in Fayetteville.

Arkansas defeated Arizona State 8-7 to sweep a two-game midweek series at Baum Stadium between teams ranked No. 1 in different polls.

Arizona State led 6-1 after the top of the fourth.

Andrew Darr, a Phoenix-area senior who grew up about 15 miles from the Arizona State campus, went 3-for-4 with 4 RBI to help lead the Razorbacks’ comeback. Darr had a two-run single in Arkansas’ four-run fourth inning to pull within 6-5.

After Arkansas won the opening game 7-3, the series finale drew an attendance of 11,014, a stadium record at the time. It currently ranks as the eighth-largest attendance in stadium history, and largest for a midweek game.

Arkansas and Arizona State both played in the College World Series later that year, although the Razorbacks had a much rockier path to Omaha.

The Sun Devils won 27 of their next 32 games after leaving Fayetteville to earn the No. 5 national seed in the NCAA Tournament. Arkansas finished the regular season 8-14 following the Arizona State series.

Both teams swept through their regionals and super regionals, and won their opening game in Omaha. The teams just missed on a rematch in the national championship series. Arkansas lost to LSU and Arizona State lost to Texas in the national semifinals.

Arkansas’ two wins over Arizona State in 2009 were the bright spot in an otherwise frustrating series between the teams that spanned six seasons between 2008 and 2013.

Arkansas’ 2010 season ended with a pair of 12-inning losses at Arizona State in a super regional, and the Razorbacks were eliminated by the Sun Devils again the following year in a regional at Arizona State's Packard Stadium.