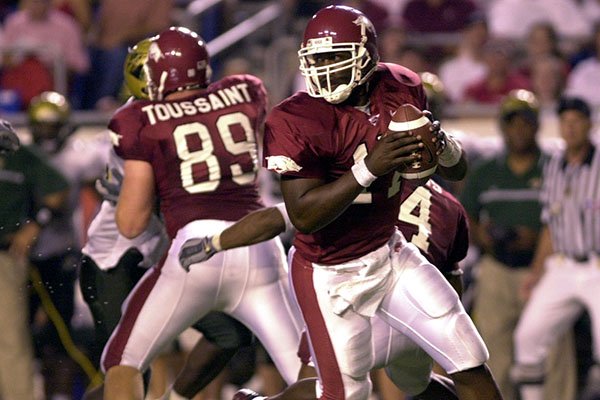 Jackson, a native of Montgomery, Ala., was 36. He had been employed as quarterbacks coach at Tennessee State since last season.

Jackson died after a single-car wreck a few miles south of Montgomery when the 2012 Chevrolet Camaro he was driving left the road and struck a tree before overturning about 8:50 p.m, according to the Alabama Law Enforcement Agency report. He was taken to a local hospital where he was pronounced dead, according to the report.

"My heart is so heavy with hurt hearing of the passing of coach Jackson," Tennessee State Athletic Director Teresa Phillips said in a statement. "We were blessed with him for a short time, but he did make an impact with our young men in his one season at TSU."

Arkansas tight ends coach Jon Cooper was a teammate of Jackson's with the Vikings.

Former Arkansas Coach Houston Nutt, who recruited and signed Jackson, said he got a call with the news about Jackson early Monday morning from Dowell Loggains, the former Razorback and current offensive coordinator with the New York Jets.

"I've just been sick to my stomach ever since," Nutt said. "I tell you, Tarvaris is one of the best living rooms I've ever been in. His mom was absolutely perfect. A wonderful mother. Tarvaris was so easygoing, just an easygoing, class, class guy."

A second-round draft pick by Minnesota in 2006, Jackson played in parts of 10 seasons with the Vikings, Seahawks and Bills, compiling a 17-17 record in 34 starts among his 59 career NFL games.

He was a backup to Russell Wilson in 2013 when Seattle won its first Super Bowl. Jackson played in the second half of Seattle's 43-8 rout of Denver in Super Bowl XLVIII in East Rutherford, N.J., to become the first backup quarterback to play in the game in 13 years.

"TJack ... you will be missed," Wilson posted on his Twitter account. "Praying for your family ... Love you man."

Wrote Seahawks Coach Pete Carroll on Twitter: "Tarvaris Jackson was a beloved teammate, competitor and Seahawk. He will be deeply missed. So heartbroken by the news of his passing. ... We love you forever."

Jackson signed with Arkansas in 2001 and played in three games as a freshman before suffering a season-ending shoulder injury and retaining his redshirt.

He played in eight games as a redshirt freshman in 2002. Jackson's final career stats at Arkansas were 17-of-48 passing for 196 yards and 1 touchdown with 3 interceptions.

When Matt Jones took a firm grip on the starting quarterback job in 2003, Jackson transferred back to his hometown to play at Alabama State.

"I never had any bad feelings about Arkansas," Jackson told the Arkansas Democrat-Gazette during preparations for the East-West Shrine Game in 2006. "I just wanted to be somewhere I could play a lot."

Jackson had a big career as a three-year starter at Alabama State, passing for 7,553 yards and 63 touchdowns, and rushing for 930 yards and 10 touchdowns. He led the Hornets to the Southwestern Athletic Conference championship game in 2003, and was MVP of the same game the next year when he guided Alabama State to its second 10-win season.

"It worked out well for me," Jackson told the Democrat-Gazette in 2006. "I'm here at the East-West Shrine Game, so I think that's the proof it was a good decision for me."

Nutt was reunited with Jackson by serving as his head coach for the Shrine game.

"We had a great week together," Nutt said. "We reminisced. I always told the players, 'Gosh, I Gatorade y'all, I stretch you, I feed you, what else can I do?' So the first thing he says is, 'You're gonna Gatorade me, you're gonna feed me and you're gonna stretch me this week, aren't you?'

The Vikings made Jackson a surprise second-round choice, the 64th overall pick and the fifth quarterback taken in the 2006 NFL Draft.

"I think you judge quarterbacks a little bit differently," then-Vikings coach Brad Childress told the St. Paul Pioneer Press the day after drafting Jackson. "When you see what you want at the quarterback position, you need to go get it. And that's exactly what I see with Tarvaris Jackson, who is a guy that's a piece of clay that has all the skills in terms of, No. 1, what's he look like throwing the football?

"He's got a great throwing motion. He's athletic. He has all those things that we're looking for and he's wired right. That's important for a quarterback."

The Vikings posted a statement on Monday that read: "One of Tarvaris' greatest attributes was his positive outlook and approach. He genuinely cared about others, was a good friend and will be missed by family, teammates and Vikings fans everywhere."

Jackson was a backup during his first season with the Vikings, then started 12 games in his second year. He completed 171 of 294 passes for 1,911 yards with 9 touchdowns and 12 interceptions. Jackson would only have one more NFL season as the primary starter, but he stuck in the league eight more years.

He returned to a backup role with the Vikings the next three seasons, the last two behind an aging Brett Favre.

Jackson signed with the Seahawks in 2011 and started 14 games that year. He completed 271 of 450 passes for 3,091 yards with 14 touchdowns and 13 interceptions. He served the following year as the backup with the Buffalo Bills, then returned to the Seahawks for his final three years.

Seattle went 1-1 in Super Bowl appearances with Jackson on the roster, beating the Broncos and losing the following year to the New England Patriots.

Last season, he moved to Nashville, Tenn., to coach quarterbacks at Tennessee State.

"I just can't believe it at age 36," Nutt said. "That's what is so upsetting. This guy was just getting into coaching, and I know he'd be outstanding at helping young quarterbacks because all quarterbacks have that aspiration to play in the NFL."

Matt Jones of WholeHogSports.com contributed to this report.