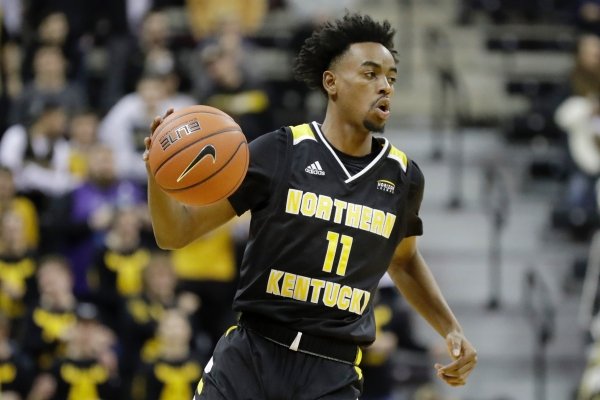 Northern Kentucky's Jalen Tate (11) brings the ball down the court during the first half of an NCAA college basketball game against Missouri Friday, Nov. 8, 2019, in Columbia, Mo. (AP Photo/Jeff Roberson)

FAYETTEVILLE -- In excess of 500 college basketball players have entered the transfer portal since the season ended, according to The Associated Press.

University of Arkansas Coach Eric Musselman and his staff contacted more than 30 players in the portal, and on Wednesday 6-6 point guard Jalen Tate and 6-9 forward Vance Jackson signed with the Razorbacks.

Tate, from Northern Kentucky, and Jackson, from New Mexico, are senior graduate transfers and will be eligible immediately for the 2020-21 season.

ESPN ranked Tate No. 15 and Jackson No. 32 among players in the transfer portal.

So where do Tate and Jackson fit into those categories for Arkansas?

"We certainly feel that they are talented and guys that could both start, for sure," Musselman said. "Having said that, everything is done in training camp and jobs are won when guys compete against each other. But both those guys have been starters throughout their careers."

Tate missed 10 games this season -- including Arkansas' 66-60 victory over the Norse in Walton Arena -- because of broken left hand, but he was the Horizon League defensive player of the year, a third-team all-conference pick and averaged 13.9 points, 5.4 rebounds, 3.6 assists and 1.9 steals in 22 games as a junior in helping the Norse to a 23-9 record.

In each of Tate's three seasons at Northern Kentucky, he was named to the Horizon League's All-Defensive Team.

Musselman said he believes Tate can help fill the void left by the loss of Jimmy Whitt, a graduate transfer for the Razorbacks this season who started every game and was their top defender.

"Losing Jimmy Whitt's ability to guard the best player on the other team, whether it's a 1, 2 or 3, Jalen now allows us to do that," Musselman said. "He's a very good rebounder for his position.

"I think he also gives us great flexibility, just as Jimmy Whitt did, and just like [twins] Caleb and Cody Martin did for us at Nevada."

"Vance stepped up against a ranked team and dominated the game," Musselman said. "When he verbally committed, I would say seven to eight of the guys off the Nevada team texted me, because our guys had tremendous respect for him."

"He has the ability offensively and defensively to really play four positions on the floor. You're talking about a player who's made 157 three-balls in his college career. He's capable of a double-double on any given night."

The Razorbacks now have four signees for next season with Tate and Jackson and Arkansas high schools seniors Davonte Davis and Jaylin Williams. Davis, a 6-4 guard from Jacksonville, signed in November and Williams, a 6-9 center from Fort Smith Northside signed Wednesday.

Musselman said Tate and Jackson got their paperwork back to Arkansas early Wednesday.

"They've been asking for their paperwork for several days and had to wait until this morning to get it," Musselman said. "They were excited to sign. They want to be here.

"They've handled everything with great professionalism and incredible maturity. They've shown leadership throughout the process on how they deal with us.

"They pick up the phone every time we call them. Both guys return every text message. We've had in-depth conversations about not only basketball, but life as well."

Tate and Jackson both have excelled in conference tournament play.

This season, Tate combined for 37 points, 6 rebounds and 6 assists in victories over Wisconsin-Green Bay and Illinois-Chicago to lead Northern Kentucky to the Horizon League Tournament title.