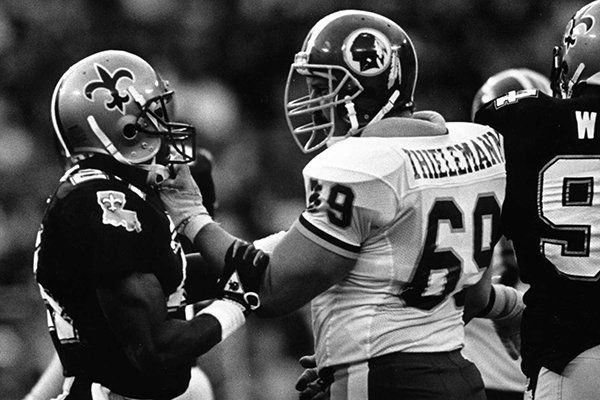 Photo by Courtesy of Arkansas Sports Hall of Fame

Washington Redskins offensive lineman R.C. Thielemann (69) is shown during a game against the New Orleans Saints on Sunday, Oct. 5, 1986, in New Orleans.

FAYETTEVILLE — Ray Charles Thielemann did his job as an Arkansas Razorback and in a dozen years in the NFL and he did it well.

Thielemann’s amazingly sturdy track record as an offensive guard at the University of Arkansas and with the Atlanta Falcons and Washington Redskins helped him into the No. 9 spot in the Arkansas Democrat-Gazette’s listing of the best Razorbacks in pro football.

Thielemann, who went by his initials R.C. throughout his playing career, had a famously mellow disposition toward the end of his NFL run. That easy-going attitude is reflected in his remarks after the Redskins accepted his request for a release following the 1988 season, his 12th and last in the league.

“I may ride my tractor the rest of my life,” Thielemann told UPI in December 1988. “If you had told me coming out of college, ‘R.C., you’re going to play at least 12 years in the NFL, go to three Pro Bowls and play in and win a Super Bowl,’ I’d have said, ‘I can’t wish for a better career than that.’ If I don’t play next year, I’ll be satisfied.”

Washington Redskins Coach Joe Gibbs, an assistant at Arkansas when Theielemann was recruited and signed by the staff of Coach Frank Broyles, acquired Thielemann from the Falcons in 1985 to join an offensive front nicknamed The Hogs. The reunion helped result in the Redskins winning the Super Bowl after the 1987 season with a 42-10 rout of the Denver Broncos in Super Bowl XXII.

The fan site The FalconsWire of the USA Today Network voted Thielemann in the No. 20 spot on its list of all-time Falcons.

A native of Houston, Thielemann signed with the Razorbacks in 1973 over Texas and Nebraska. He developed quickly and lettered in the fall of 1973, which was the second year the NCAA allowed freshmen to compete.

Thielemann eventually became a two-year All-Southwest Conference selection as a guard and center, credentials which would earn him a spot on the UA’s All-Century team released in 1994 in the 100th year of football at Arkansas.

The 1977 NFL Draft proved the offensive front was the strength of the Razorbacks teams of the mid-1970s.

Thielemann was the first Razorback off the board, going with the 36th pick in the second round to the Falcons, followed by tackle Greg Koch to the Packers with pick No. 39 and tackle Gerald Skinner to the Patriots in round 4. Arkansas guard Leotis Harris would be the Packers’ sixth round selection the following year.

At the time he was drafted, Thielemann was 6-4 and approximately 240 pounds.

“I wasn’t very big when I got to the Falcons, but it was a different era back then,” Thielemann told the Atlanta Journal-Constitution in 2016. “We did a lot of pulling and trapping and run blocking, so I could get away with that kind of size then.”

Thieleman was an immediate hit with the Falcons, starting all 14 games as a rookie right guard in 1977 at age 22. He would go on to start all 114 games he played for Atlanta, switching to left guard in 1983. Another interesting factoid about Thielemann’s career: He recovered at least one fumble in his first five years in the league, including two every season between 1978-81.

Thielemann started 12 games at right guard during the strike-shortened season of 1987 after which he claimed his lone Super Bowl ring.

Gibbs told the UPI this about Thielemann following the 1988 season: “Let me say this, he’s a great person and a great player. He’s meant so much to us here.

“I just appreciate him coming in toward the end of his career and helping us go to the Super Bowl.”

According to the Atlanta Journal-Constitution, Thielemann went on to become president and owner of Capital Mortgage Advisors in Alpharetta, Ga., and served as an NFL compliance officer.