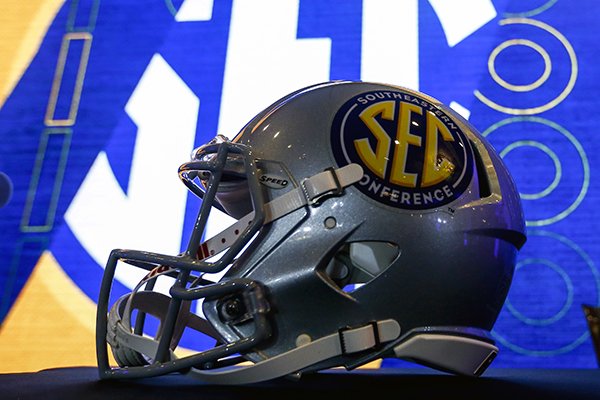 LITTLE ROCK — Programming by other media clears the conscience for devoting several hundred words to East vs. West and a way to retain all SEC games in an abbreviated football season.

Live sports programming on one TV network and an open-ended question on a sports talk show in Northwest Arkansas illustrate how some in the business are trying to provide daily content in today’s weird world:

• On a late-March weekend with only one important Kentucky Derby prep race, NBC Sports Network devoted 12 hours to thoroughbred racing, one of the few sporting events happening these days even though spectators are not present. Just last week, the network announced it would continue the partnership with TVG and show four hours of racing each Friday, Saturday and Sunday through May, highlighted by live coverage of the May 2 Arkansas Derby.

Somebody, somewhere is watching … and wagering on thoroughbreds. On Saturday, Oaklawn’s total handle of $19 million included only $38,000 by the few folks at the track.

• Last month, a radio host desperate for content asked listeners the two best athletes they had seen in person and received calls with dozens of names spanning six decades.

When he popped the question on air, Lance Alworth and Shaquille O’Neal came to mind. Rehashing the conversation with a relative, I wished I had mentioned Earl Campbell and his performance in the 13-9 victory in Fayetteville in 1977 when he carried 34 times for 188 yards and caught a 28-yard screen pass — one of only six in his college career — that set up the go-ahead touchdown in the fourth quarter.

If there is a 2020 season, both Georgia and Florida will have opportunities to provide ammo for those who cite recent regular-season records while contending the SEC East’s elite is on par with the SEC West’s best. But the other side quotes results from the conference championship game, noting Georgia 28, Auburn 7 in 2017 is the only victory by an SEC East team since Florida defeated Alabama in 2008.

The long shots are Arkansas and Vanderbilt at 250-1, but UA fans might be encouraged by the fact that Razorback opponents Mississippi State, Ole Miss and Missouri are each 100-1.

Missouri’s victory over Arkansas last November enabled the East to finish the regular season even with the West at 7-7. The year before, Missouri’s 38-0 victory over the Razorbacks completed the East’s 8-0 sweep of Arkansas, the two Mississippi schools and Auburn, and provided the division with a 9-5 advantage.

Defenders of the West will argue that none of the losing teams that year topped .500 in the SEC; East fans counter that almost all the 50-something victory gap between the divisions since Arkansas and South Carolina joined in 1992 is reflected in Vanderbilt’s 13-61 record against the West.

Any final decision about the 2020 season is weeks away and this look at the schedule could be a waste of time, but delaying the start of the season is a possibility. Even with a Sept. 26 start, all 14 SEC teams could get in eight conference games with some give and take with lesser nonconference opponents and the loss of some contests against high-profile nonconference opponents.

Specifically, the half-dozen conference games during the first three weeks would replace the games vs. the aforementioned lesser foes. Only Missouri has more than one league game before Sept. 26, but both could be accommodated since Missouri has nonconference games on the same day as South Carolina and Vanderbilt.

Arkansas is scheduled to play Mississippi State on Sept. 19, but the game could be moved to Nov. 21 when MSU plays Alabama A&M and Arkansas takes on Louisiana-Monroe.

Other SEC games during the first three weeks include Auburn vs. Ole Miss, Georgia vs. Alabama, and Kentucky vs. Florida.

Auburn has an open date on Oct. 24 and the Rebels play UConn that day while both Georgia and Alabama have nonconference games on Sept. 26.

Kentucky at Florida requires more of a sacrifice — subbing the SEC game for in-state contests vs. Louisville and Florida State in the season finale.

Along the way, traditional open dates prior to Alabama-LSU and Georgia-Florida would disappear, but that is a small price to pay. Also lost in such a reshuffling would be games vs. high-profile opponents, including LSU-Texas, Tennessee-Oklahoma and Arkansas-Notre Dame, scrapping plans of more than one UA fan that planned to take in the game and tour the campus in South Bend, Ind.

Still, nine regular-season games is better than none.