State of the Hogs: Sweet dreams 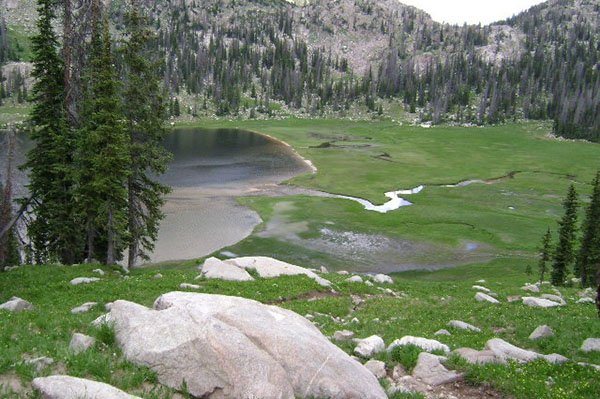 Lake Luna, on the Wyoming Trail in Colorado, was the site of a fishing trip the author took in 2009. (NWA Democrat-Gazette/Clay Henry)

Gas prices have dropped to the point that $20 fills my truck for the 550-mile first leg of my dream fishing trip.

You can get to Jim Daniel’s ranch east of Denver International Airport in 12 hours, and that’s even if you don’t break 75 mph across Kansas. I can handle that sort of restriction, as long as my George Strait "50 Number Ones" CDs keep playing.

That’s right, all 50 on the two discs hit No. 1 on the charts. If one song doesn’t do it for you, the next one is about as solid a bet as a Darren McFadden handoff. And, a song as good as a toss sweep to Lance Alworth is next.

The restrictions from our government prevent this sort of a cross-country trip through our heartland right now, but as the price of gas drops below $1 per gallon, I can’t help but dream. That’s what keeps us going, hope and dreams.

I’m like Strait, my favorite Country-Western troubadour, that I have at least 50 No. 1 fishing trips in my rearview mirror and lots more left to do. It’s time to repeat some of the old ones.

As I’m reminded almost every time I tell folks I’m now living on the Norfork River in southern Baxter Country, almost every day I can produce a No. 1. That is even if I don’t stray far from my 2-acre property in the pines, oaks, dogwoods and red buds.

Cotter’s Bill Pettit joined Jim and I on that Colorado truck trip that turned horseback in 2009. I really wasn’t sure where we were going when we left Arkansas. Jim gives you some information, but not everything.

We spent the first day at Jim’s ranch helping sort through the camping gear to make sure a stop at Cabelas wasn’t required for replacement parts. None were needed. He’s got tents, stoves, cots, sleeping bags and everything else. He said to pick out a pillow from the house. We do not camp rough.

Then Jim started pulling out the gear to load into the four-horse trailer. We would take two trucks, one to pull the four horses, the other to pack some of the saddles, backpacks and fishing gear. I splurged with two fly rods, one of them vintage split bamboo.

Destination: Luna Lake on the Wyoming Trail. The Utes were first to wear that path from New Mexico to Montana. Later fur trappers used it, then railroad workers. There are open meadows where railroad ties were probably cut and hauled out by horses.

An early morning start from Jim’s ranch got us to the trailhead at Buffalo Pass, just under 10,000 feet. That’s above and east of Steamboat Springs. Walden is on the other side of the pass. Obviously, the pass is on the Continental Divide and the trail sticks to that dotted line on the map. You head almost due north.

We loaded our horses, one of them just carrying supplies. I probably looked like a cowboy until I popped onto JD, the 18-year-old quarter horse. I wore my straw George Strait Resistol, my George Strait Advanced Comfort jeans and Ariat boots. I try to sit and rock in the saddle like Jim. But basically, I just hold on.

Jim had on the same type stuff, but also a .38 strapped on his hip. I later learned that was for protection from a possible wolverine attack. I was more worried about mountain lions or bears, and there are some around Luna Lake, but Jim said a wolverine could wreak more havoc to a camp.

You might see elk or moose, but probably no big meat eaters. They will see you and stay clear. A moose with a calf can treat you badly, but you have to make quite a few mistakes to get in real trouble. I came close to doing that one time on another Colorado trip, but not this time.

Petitt looked more like Jimmy Buffet. He had a parrot head straw hat and lace-up Ariat shoes. But he handles a horse great, better than me. It’s funny, but the horses figure out whom to trust and they all liked Bill.

Oh, how I’d like to do that trip one more time. I’ll be 66 when conditions are right up high in July, and Jim and Bill are both 72. All of us are in good enough shape to handle the chores required to take care of horses.

We’d be safe. There will be no humans around, although we’ve got at least seven or eight weeks before it’s perfect for that kind of trip. The snow will be mostly gone in five or six weeks, but you want it dry enough that the bugs aren’t so bad.

It’s about an eight-hour trail ride from Buffalo Pass to Luna Lake, mostly flat. There is a great place to eat lunch at the edge of a meadow with a sheer drop of maybe 1,000 feet with a look into North Park. Jim and Bill don’t mind dangling their legs off the edge. Not me. I’d eat my PB&J with a Little Debbie Oatmeal Crème Pie sitting on a rock about 10 yards back.

Yeah, I’m a weenie, but I will probably out-fish them. We will eat fresh fish each night if that’s the goal.

I once feared that kind of a trail ride. My left knee is bone on bone. Mark Powell, my knee doctor, told me I can have no more scopes. It didn’t act up on our last trip to Luna Lake, but going down a steep slope is problematic. There are two such sections.

There was soreness as we built our camp that evening, an hour before a glorious sunset. And, just before dark, Jim made dinner, pre-cooked parmesan chicken out of an Air Force produced meals-ready-to-eat foiled package. Boil the pouch, then enjoy.

I brought a battery-powered sound box. George Straight serenaded the campers and the cutthroat trout with "Cowboys Like Us." A flask of Crown Royal Black was passed around. It helps the knee soreness.

I’ve never seen stars that bright. My thoughts as we sat at the fire with only one lone hiker camped about 200 yards away: I wondered in 2009 what my father would think of this.

It had been about six years since he’d passed, never knowing that I could tie my own fly, ride a horse into high country and find rising trout all by myself, then cook and eat them.

I ache to go back. There is unfinished business. Each day we explored to a new lake and caught the specialty there. We found a lake full of brook trout, another with only brown trout. But, we didn’t ride to Lake Margaret, the one that’s supposed to be stacked full of BIG cutthroats.

You can find those chain of lakes on Google Earth by typing just Luna Lake. For reference, it's just east of Steamboat Springs. You probably can find the Buffalo Pass trailhead where you’ll have to start early in the morning. You can hike it, but it’s easier by horse. The trail is worn.

Jim is the ultimate lead cowboy on this sort of a trip. He’s a good fly fisher, but a better elk hunter, with bow or rifle. Over 25 years ago, he got comfortable taking others to Luna after a few similar trips to set up elk camp.

His horses teach you how to ride. If you rein them in to a wrong place, they turn to give you a look that is priceless. It’s like they are reminding you that they are in charge and you are a nut. If you insist, they’ll go there.

On a similar trip – on the other side of North Park – there was an incident where JD refused for a minute to go down a grassy slope to check out a brook trout lake. Jim said if I insisted, JD would go. He did, but it was a ride I won’t repeat.

JD trotted out the last 30 yards straight down as I wondered if I was going straight over his head. A horse trot is less than ideal. Only someone who has ridden down a hill understands.

It wasn’t a full-blown rodeo. JD was always in perfect control of his footing and I held tight. When to the lake, I turned around and looked atop the mountain where we’d been and thought, “Only a rookie would attempt that!” Jim later said, “Yup.”

Bill wasn’t on that trip. It was just me and Jim, something that makes for less chitchat. Jim will converse, but he doesn’t throw in extra words. His sentences have purpose.

There can be some deep dives into football season at the end of the day. The rule is that Jim gets a few questions on the Razorbacks each night. He reads everything I write and I try not to miss anything in my columns, so there shouldn’t be any major items left.

What I’d tell Jim this summer would be less useful than normal. There’s been no spring football practice. I guess I could tell him about Sam Pittman’s wonderful coaching staff that reminds of something Frank Broyles would do.

Jim went to school at Arkansas – when he started to pile up agriculture degrees – during the Broyles glory days. He thought Arkansas would win Southwest Conference titles forever. If I want to entertain my buddy from Fourche Valley, a Broyles-Wilson Matthews conversation about off-season training will do the trick.

A Loyd Phillips or Wayne Harris story is gold, too. A couple of those could lead Jim to pass the flask of Crown Royal Black around an extra time before it’s bedtime.

I can’t remember what I dream while at Luna Lake. Maybe it is a good Razorback football season. This summer, it would just be that there is one. My typical dreams would be meaningless there. How can you dream of something you are already doing?

It’s too early for a Colorado trip now. The snow is too deep at Luna Lake. Maybe by July when things are green and lush on the Wyoming Trail, all is well with our world and I can make a trout trip. One thing is certain: trout live in beautiful places, my backyard included.

I sent a text to Jim asking if he had one more trip in him. JD the horse is gone, but Jim assures that there is "a Tennessee Walker ready to carry your sorry butt on a mountain trail ride” into paradise and won’t mind if I point him the wrong way. That horse has a gait as smooth as silk. My motivation to make the trip was already high, but that was a nice thought.

Oh, we must have dreams. A good place to contemplate September dates with Nevada or Notre Dame would be while casting for a two-foot Lake Margaret cutthroat.

The man with the purposeful, short sentences just texted: Yup.