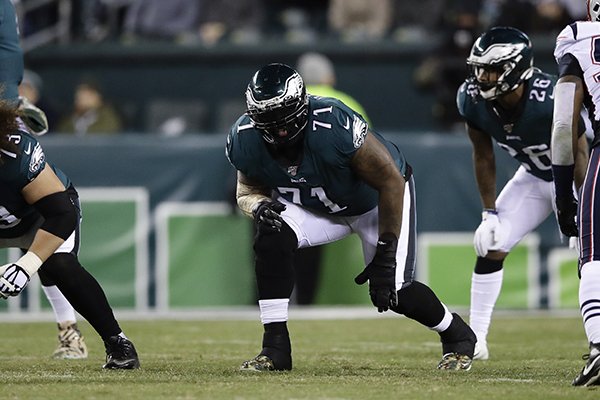 FAYETTEVILLE — NFL coaches, scouts and executives weren’t sure what to make of Jason Peters at the scouting combine in 2004.

Peters decided to enter the draft after his redshirt junior season at the University of Arkansas in which he caught 21 passes for 218 yards and 4 touchdowns as a tight end and earned All-SEC second-team honors.

But at 6-4 and 320 pounds, Peters had the look of an offensive tackle, and he showed ability to play there with 61 knockdown blocks as a junior.

The speed for a big man was on display at the combine as well when Peters ran the 40-yard dash in 4.93 seconds, and he had playing experience for the Razorbacks as a defensive lineman at the start of his college career after he came to Arkansas from Queen City, Texas.

“He’s what they call a ‘jumbo athlete,’” Phil Savage, then the Baltimore Ravens’ personnel director, told USA Today at the 2004 combine when asked about Peters. “Very agile. Catches the ball well.

“Blocking? He’s probably not as good as what people expect to see, as far as playing tackle. Plus, from everything I know, his mentality is more to be a skilled-position player.

“He’ll be intriguing to watch the next couple of years, to see what he develops into.”

Peters wasn’t intriguing enough for any NFL teams to draft him, but he developed into one of the best offensive tackles of all time.

The NFL and Pro Football Hall of Fame made Peters a first-team selection for the league’s All-Decade Team of the 2010s.

Peters, a nine-time Pro Bowl selection with the Buffalo Bills and Philadelphia Eagles, is ranked No. 4 on the Arkansas Democrat-Gazette’s countdown of top pro Hogs.

In 2016, NFL.com ranked Peters No. 22 on its list of the best ever undrafted free agents.

“Jason Peters as an undrafted free agent is absolutely one of the steals of the century in the NFL,” said Houston Nutt, who was Arkansas’ coach from 1998-2007. “I’m just glad Jason did all the right things to get that second contract, and then that third contract.”

Peters, 38, is waiting to see if he gets another contract offer from an NFL team after his latest deal with the Eagles expired following the 2019 season.

Last season — Peters’ 16th in the NFL — he was still good enough to start 13 games for an Eagles team that made the playoffs.

The key to his longevity and consistency, Peters told Bleacher Report in 2014, was keeping the mentality he had as a rookie in 2004 when the Bills signed him as a free agent.

“I’m a free agent,” Peters said of his mindset. “That’s how I work, and that’s how I’ll always work. I didn’t get drafted.

“I always have that mentality that I’m a free agent, and nobody is going to take my job.”

Philadelphia acquired Peters in a trade before the 2009 season and signed him to a six-year, $60 million contract extension.

Peters had been a two-time Pro Bowl pick with the Bills, but he was unhappy with a five-year, $15 million contract he had signed in 2006 that by 2008 made him the team’s No. 3 offensive lineman in terms of salary after some high-priced free agent additions. He missed training camp in 2008 and was missing offseason workouts with the Bills to show his contract dissatisfaction.

The Eagles were happy to pay Peters the kind of money he believed he deserved.

“Jason Peters is the best left tackle in football,” said Andy Reid, Philadelphia’s coach at the time. “He is a powerful and athletic tackle and I have admired his play over the last few years on film.”

Peters began his NFL career with the Bills as a free agent.

After being cut in training camp, Peters was signed for the Bills’ practice squad and worked at tight end. Late in the season he was activated and played special teams.

On Dec. 19, 2004, Peters blocked a punt, chased after the ball and recovered it in the end zone for a touchdown to help Buffalo beat Cincinnati 33-17.

“As long as I’m helping out in some way, as long as people feel like I belong, that’s good enough for me,” Peters said after the game. “I’m just here to do what they tell me to do and to try to find my place.”

Peters found his place at offensive tackle when the Bills moved him there in 2005 after he asked what he could do to get more playing time.

“I didn’t have a clue what I was doing my first year,” Peters told Bleacher Report.

By midway through the 2005 season, Peters had learned enough about playing tackle the Bills made him a starter.

“I coached Anthony Munoz, who was the best player ever at his position,” Jim McNally, an NFL offensive line coach for 27 years who had that position on the Bills’ staff from 2004-07, told Bleacher Report. “Jason Peters is the next-best player I’ve ever coached.

“He didn’t really make a lot of errors because he was a generally instinctive football player … It just took him maybe a little time to figure out the pass protection, and things like when to switch on a stunt, Should he stay with the guy? Or should he pass him off to the guard?

“It was just little things like that, but it really didn’t take him very long.”

Peters started at right tackle the final 10 games in 2005, then moved to left tackle where he has continued to be a mainstay the rest of his career.

In 2014 Peters signed a five-year, $51.3 million contract extension with the Eagles. Last season he had a 1-year, $6 million deal.

Among the teams interested in signing Peters for the 2020 season, according to NFL Network, are the Tampa Bay Buccaneers, Cleveland Browns and Los Angeles Chargers.

Protecting Tom Brady’s blind side in Tampa Bay? That doesn’t sound like a bad way for Peters to end his NFL career.

“I’m really proud of Jason and the pro career he’s made for himself,” Nutt said. “He should be an inspiration to all the guys who don’t get drafted.”

Arkansas’ coaches made the decision to move Peters from defense to offense before the 2002 season.

“Jason really wasn’t getting along with the coaches on defense and he came to my office frustrated about it,” Nutt said. “I said, ‘Hey, let me help you. We’re going to move you to tight end big man. I’ve seen your hands, and I’ve seen your footwork on the basketball court from high school. You’re going to be just fine.’

“And he was great on offense for us. I think he could have been a tight end in the NFL too. He just outgrew the position.”

At the NFL combine in 2004, Peters was asked by a USA Today reporter about the possibility of moving from tight end to tackle.

“I enjoy playing tight end, but whatever position a team wants, I can play it,” Peters said. “I’m going to adapt.”

Man, did he ever.