For Day 3 hopefuls, Razorbacks' pro day was just in time 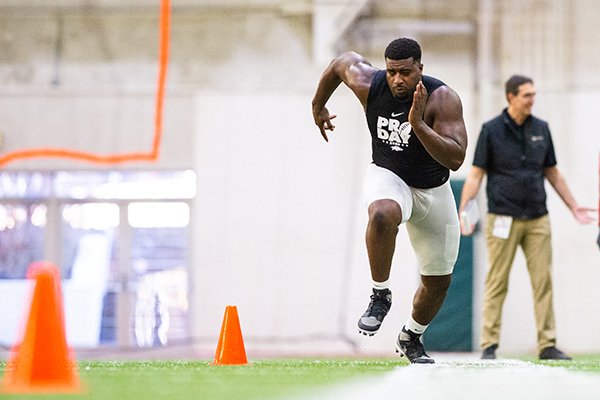 FAYETTEVILLE — Former Arkansas safety Kamren Curl wasn’t sure what to think of the timing of the Razorbacks’ pro day last month.

The March 11 workout for scouts from 22 NFL teams was nine days after Curl had finished his workouts at the NFL Scouting Combine in Indianapolis.

“At first it was like a thing where, ‘They aren’t going to put Pro Day a week after the combine? I’m probably going to still be sore and tired,’” Curl said.

As it turned out, the timing of Arkansas’ pro day couldn’t have been better, especially for those players like Curl who remain undrafted entering the final day of the NFL Draft on Saturday.

The NBA suspended its season later that night, beginning a rapid domino effect across the sports world in response to the covid-19 outbreak. Within two days the Southeastern Conference had called off all sporting events on its campuses, including pro days.

The Razorbacks were one of just two SEC programs to have a pro day. Auburn was the other.

The rest of the conference’s draft prospects had to be creative. Former Alabama quarterback Tua Tagovailoa, who had not been cleared from a hip injury at the time of the NFL combine, held a virtual workout earlier this month in Nashville, Tenn., in which he threw 72 passes that were videoed from a low and a high angle.

Former LSU safety Grant Delpit videoed himself running the 40-yard dash at a high school in Baton Rouge, La., after skipping the 40 with an ankle injury at the NFL combine. Delpit’s video to NFL teams included three angles of his run, including an angle to show the hand-held timer.

Arkansas’ pro day was originally scheduled for March 18 by former head coach Chad Morris, but was pushed ahead a week after new coach Sam Pittman was hired.

“I feel like we were pretty lucky so we could have scouts come and get their eyes on us face to face,” Curl said, adding, “I feel like it helped us a lot.”

Curl, tight end C.J. O'Grady and linebacker De'Jon Harris are among the former Arkansas players who might get drafted Saturday. All three players attended the NFL combine along with former Razorbacks defensive tackle McTelvin Agim, who was drafted by the Denver Broncos 95th overall in the third round Friday.

The players who might benefit most from Arkansas' pro day are the players who weren't invited to Indianapolis. That includes defensive lineman T.J. Smith, who had good testing numbers at the pro day, primarily on the bench press with 29 reps of 225 pounds.

Smith, who had 20 tackles and 2.5 sacks as a senior, is still a long shot to be drafted Saturday, but at minimum seems to stand a good chance of signing an undrafted free agent contract by the end of the weekend. He said there are “very few” teams who haven’t contacted him since his pro day, and among those who have called was Arizona Cardinals head coach Kliff Kingsbury.

“Guys that may have had some good tape and might have been in the position as me - didn’t have a combine invite - and they didn’t get to showcase themselves at their pro day,” Smith said. “For me, everything’s been good, but you see guys that you know, see guys that you trained with are kind of struggling, trying to do what they can to get a virtual opportunity and things like that.”