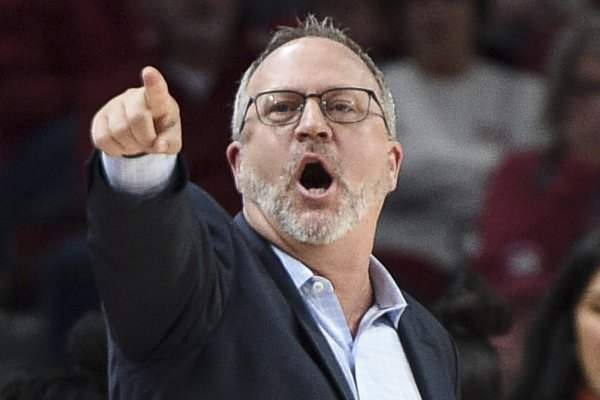 The two-time All-Pac-12 guard signed with Arkansas earlier this week as a graduate transfer after playing the past two seasons at Oregon State.

Slocum played the point for the Beavers, averaging 15.2 points, 4.6 assists and 3.2 rebounds in two seasons.

She joins a roster with plenty of returning talent, despite the loss of two to graduation and two more to the transfer portal, Neighbors said.

"She allows us to absorb the loss of graduation of Kiara [Williams] and Alexis [Tolefree]," Neighbors said. "She slides right into that and takes a chunk of those minutes for sure."

Neighbors referenced the winding curves of the Pig Trail when discussing the journey that put Slocum in a Razorback uniform. Arkansas will be her third school after she transferred to Oregon State from Maryland after her freshman season.

But Neighbors' history with Slocum goes back to her high school days in Idaho.

She verbally committed to play for Neighbors at the University of Washington prior to the start of her junior season in 2015. Months later, Neighbors' Washington team made the NCAA Tournament but lost in the first round.

"I land back in Seattle from getting back from the Final Four, and I've got a phone message from her that says she needs to talk to me, and my stomach sunk," Neighbors said. "And I immediately knew she was getting ready to tell me bad news."

Slocum decided to go another direction, eventually signing with Maryland.

Neighbors and Slocum crossed paths again at the WBCA Awards ceremony in Dallas after her freshman year at Maryland. He was in attendance to support Washington guard Kelsey Plum as she accepted the National Player of the Year award. Slocum and her family was sitting next to him when she was honored as the WBCA Freshman of the Year.

At the time, Neighbors already had accepted the job in principle at Arkansas. Two weeks later, Slocum announced she was leaving Maryland.

Neighbors renewed his recruiting efforts for Slocum, but again they didn't bear fruit. Neighbors said he couldn't blame her for choosing Oregon State after her rain-soaked visit to Fayetteville.

"She came on an official visit to Arkansas," Neighbors said. "If you go back and look at the dates, it's the weekend we had 12 inches of rain on a Friday and a Saturday afternoon, and Fayetteville flooded. So she chose to go to Oregon State, which is kind of hard to blame her with where we were at and what she saw on her 48-hour visit."

Neighbors wasn't deterred by the previous experiences when he got a third chance to recruit Slocum, and the third time was the charm.

"I think that makes this that much more special," Neighbors said. "It's gonna kill me knowing I could have coached her for four years, but I only get eight months. But we'll make the most of those eight months.

"I never had any apprehension. Didn't worry about it. We talk honestly and openly, and I think that was why it worked out this time."

He also had the blessing of next year's seniors Amber Ramirez and Chelsea Dungee, who both had previous relationships with Slocum.

"Their prior relationships were positive, and they both said, 'She fits in our locker room. She fits on our campus,' " Neighbors said. "The fact that these two have been here and gone through the exact same thing pretty much that she has in a transfer, the fact that they checked off and signed off on her as a person and as a player, that meant a lot to us as a staff."

Neighbors also said he and Arkansas Athletic Director Hunter Yurachek have discussed a contract extension, but it's on hold for now. He said he's happy at Arkansas and not looking at any other job.