OPINION From The Files: 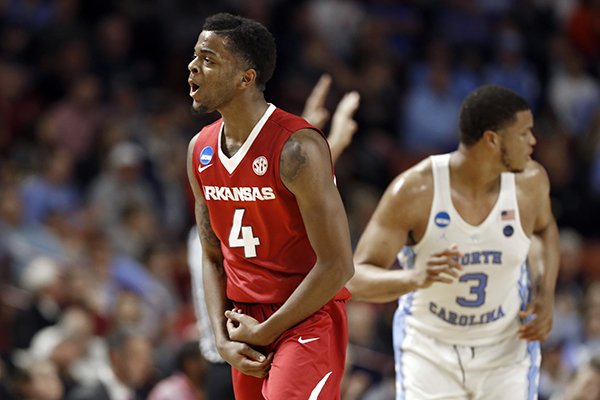 Arkansas' Daryl Macon (4) reacts after making a three-point basket against North Carolina during the first half in a second-round game of the NCAA men's college basketball tournament in Greenville, S.C., Sunday, March 19, 2017. (AP Photo/Chuck Burton)

After covering the University of Arkansas basketball team at the SEC Tournament in Nashville, Tenn. -- where the Razorbacks advanced to the championship game before losing to Kentucky 82-65 -- Arkansas Democrat-Gazette sports editor Wally Hall, photographer J.T. Wampler and myself stayed on the road for the NCAA Tournament.

The Razorbacks were sent to Greenville, S.C. -- less than a six-hour drive from Nashville -- for their NCAA Tournament assignment, so it didn't make sense to drive eight hours back to Fayetteville and then fly to Greenville.

We drove to a resort town in the Great Smoky Mountains in North Carolina, then on to Greenville, where Arkansas was a No. 8 seed and opened against Seton Hall.

The first- and second-round games originally had been scheduled to be played in Greensboro, N.C., but in September of 2016 the site was moved to Greenville because of North Carolina's so-called "Bathroom Bill."

The North Carolina state legislature passed a law forcing transgender people to use the bathroom corresponding to the gender on their birth certificate and not the one with which they identified.

It caused a big backlash, with multiple sporting events being moved out of North Carolina, including the NBA All-Star Game and the ACC Championship Football Game -- both scheduled for Charlotte. But probably the most significant event the state of North Carolina lost was the NCAA Tournament.

North Carolina Coach Roy Williams and Duke Coach Mike Krzyzewski were both critical of the law -- Coach K called it "embarrassing" -- and I remember thinking, "If these guys are against it, how can anyone get re-elected in North Carolina who voted for it or won't amend it?"

Unless maybe if that politician was a North Carolina State graduate.

The law eventually was changed, but for the 2017 NCAA Tournament it meant the Tar Heels and Blue Devils wouldn't get to play in their home state.

I had been to Greensboro for a game about 100 years earlier --on Jan. 30, 1983, to be exact when Arkansas beat Wake Forest 68-65 at the Greensboro Coliseum on Super Bowl Sunday when the Washington Redskins beat the Miami Dolphins 27-17 -- but never to Greenville previously.

If you ever get a chance to visit Greenville, I highly recommend it.

About a 40-minute drive from the Clemson campus -- so you can see if Dabo Swinney is around -- Greenville has a population of approximately 68,000, but the metro area including Anderson and Spartanburg is more than 400,000.

Greenville has a neat downtown with lots of nice restaurants and bars and is very picturesque. I'm sure Greensboro has changed a lot since I was last there, but Greenville seemed to have a lot more going for it.

The Razorbacks were glad to be in Greenville because it meant that after they beat Seton Hall 77-71 they got to play the No. 1-seeded Tar Heels in South Carolina instead of North Carolina.

Granted, there were lots of North Carolina fans at Bon Secours Wellness Arena, but with South Carolina playing Duke in the second game of the doubleheader, it hardly seemed like a home game for the Tar Heels.

The Tar Heels rallied to beat Arkansas 72-65 after it looked like the Razorbacks were going to advance to the Sweet 16 for the first time since 1996.

But North Carolina made some big plays at the end and also got some favorable calls -- shocking, I know -- including a tip-in basket by Kennedy Meeks after a missed shot by Joel Berry, who knocked down Adrio Bailey for what should have been a charging call.

To the credit of Arkansas Coach Mike Anderson and the Razorbacks, they didn't use some of the questionable calls as an excuse after the game when asked about them in the interview room and the locker room.

During the season, college teams no longer have open locker rooms for postgame interviews as was common when I began covering the Razorbacks, but locker rooms still are open after NCAA Tournament games.

Open locker rooms for teams that win their NCAA Tournament games are fun places to be and reporters get lots of good material for their stories.

But the locker room of a team that just lost in the NCAA Tournament is like a morgue as the finality of the season -- and for the seniors, the end of their college careers -- sets in.

The players on Arkansas' team were good guys, and it was tough to see them hurting after such a crushing loss. I appreciated how the Razorbacks handled themselves.

When Arkansas went up by five points late in the game, I began thinking about the Sweet 16 for a moment.

The Arkansas-North Carolina winner would advance to Memphis, which was on the way home from Greenville to Fayetteville.

I figured it wouldn't make much sense to drive all the way home, then back again to Memphis.

The road trip, it seemed, was going into a third week.

But it wasn't meant to be as the Tar Heels overcame the Razorbacks and the "Bathroom Bill" and went on to win the national championship.