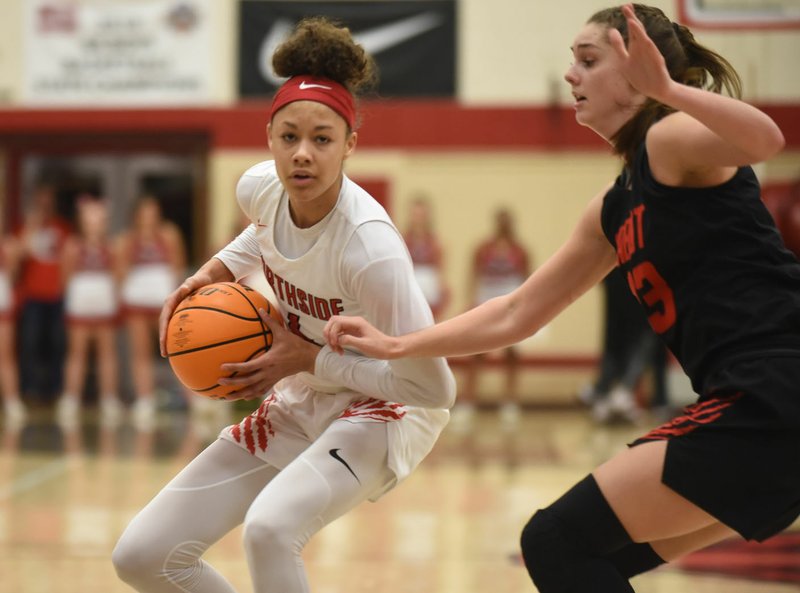 Fort Smith Northside's Jersey Wolfenbarger (4) drives to the lane Tuesday, Jan. 28, 2020, against Cabot during the first half in Kaundart-Grizzly Fieldhouse at Northside High School in Fort Smith. Visit nwaonline.com/prepbball/ for a gallery of photographs from the game and nwadg.com/photos for today's photo galleries. (NWA Democrat-Gazette/David Gottschalk)

Neighbors was the first to offer her during her freshman season and that helped her decision.

“I think it just came down to Coach Neighbors believing in me and me believing in him from the start,” Wolfenbarger said. “He offered me when I was a freshman at 5-6, around 100 pounds and then it all kind of played out and that resonated with me - just with his initial belief in me.”

Oregon, Baylor, Notre Dame and Oregon State were other programs she heavily considered before deciding on the Razorbacks.

Arkansas’ offense led the SEC in scoring at 83.4 points per game and 3-pointers made with 314, attempted with 808 and in shooting percentage at 38.9 percent.

“Their style seems to have the ability to fit everybody and everybody is able to thrive in that stetting. That really interested me to begin with,” Wolfenbarger said.

She led the Grizzlies to a 28-1 record and the Class 6A state title as a sophomore after averaging 22.5 points, 3.3 rebounds, 2.5 assists and 1.3 steals per game while being named Arkansas Democrat-Gazette Player of the Year.

Wolfenbarger, who averaged 18.7 points, 6 rebounds, 3.7 assists and 1.5 steals as a junior, was named Arkansas Gatorade Player of the Year.

Prospects Nation rates her 4-star recruit, the No. 7 guard and No. 22 overall prospect in the nation for the 2021 class. She made up her mind she wanted to attend Arkansas after a recent workout.

“I just came back from the gym one day," she said, "and I told my mom when we got home I know where I want to go. And she said, 'You do?’ I waited a few days and I was just as excited, so I knew that was the place for me.”

Wolfenbarger’s mother was ecstatic about her decision to play close to home.

“She was because a lot of family is here, too, and just the fact I had their support because they live pretty close to the campus,” Wolfenbarger said.

The current Razorbacks players also help her feel at ease with her decision.

“They all have really positive things to say about the program and the coaching staff,” Wolfenbarger said. “You can tell it’s genuine. It wasn’t like just to get you there. You could really feel the team chemistry and the love they had for each other.”

“She comes into the gym ready to work,” Prospects Nation analyst Chris Hansen said earlier. “Her length, speed and quick release are going to pay dividends in college when she gets her shot off even with the other team having the scout on her.

"As she gets stronger that length is going to help her score in the paint as well. Her current game reminds a little of Oregon wing/forward Erin Boley as an elite shooter with size, but Jersey has more foot speed. She has a really high ceiling.”