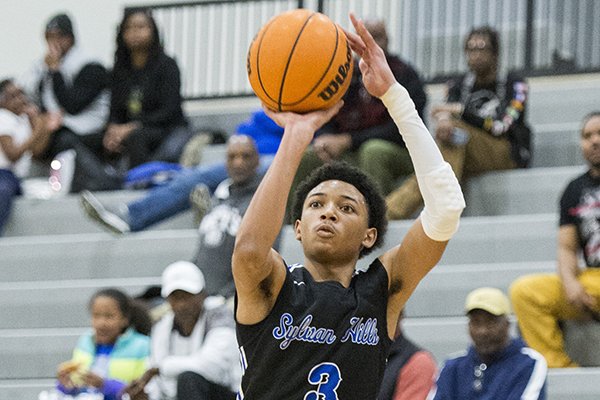 FAYETTEVILLE — Sylvan Hills sophomore basketball player Nick Smith has remained focused both on and off the court during the coronavirus pandemic.

“The first thing I have really been paying attention to is my school work because going to school and taking online classes are totally two different things,” Smith said. “I think it is harder to do online classes because, first of all, they give us so much work that they wouldn’t give us when we were at school.

“The second thing is that I have been going to the gym pretty much every day, two times a day and trying to keep my body fit and prepared in case we have an AAU season.

“I also have been just relaxing and keeping my body clean, staying away from a lot of people.”

“I have a few more, but I am not going to post them yet,” Smith said.

He is not concentrating on recruiting right now and instead allowing everything to go through his father.

“To be honest I don’t really talk to a lot of coaches right now,” Smith said. “Sometimes they will catch me off guard and my dad will tell me that (Memphis head coach) ‘Penny Hardaway wants to call you in a few days so lock his number in,’ or 'Coach (Bruce) Pearl from Auburn,' Alabama and Iowa State, I could really go on and on, but to honest, I am paying them some mind, but not a lot because I don’t know what is going to happen with all this corona and stuff going on.”

“I think the 2022 class is underrated right now,” Smith said. “They are going to automatically put that 2020 class ahead of us because they have a lot of people going to the Razorbacks or to high Division I schools. But the 2022 class is arguably the best class in Arkansas right now.”

Smith was impressed with what Arkansas (20-12) was able to accomplish in its first season under head coach Eric Musselman.

“I think they did pretty good,” Smith said. “I think a lot of people thought they were going to have a losing season, but they did better than what they did the previous year before, in my opinion.

“They were kind of the underdogs like we were and had to work their way up to get that respect.”

Smith is hoping that Nike’s EYBL AAU basketball circuit, which was canceled this spring because of the pandemic’s social-distancing guidelines, will still be able to be played this summer.

“I will be running with Brad Beal Elite again this year, but will be playing with the 16s instead of the 17s this season because they want people to play their age group this year during all this coronavirus stuff,” Smith said.

“I don’t really have any personal goals because I am more of a team player and if we win than the individual goals are going to come later,” Smith said. “The main thing I want to do is win the (Nike) Peach Jam this year.”

Sylvan Hills loses three starters off a team that finished 20-8 last season and finished its season with a 66-57 loss to eventual co-champion West Memphis in the Class 5A state tournament quarterfinals.

"I think we can actually push for the state next season. I am real confident in myself and my teammates to step up when it is time to do that. Just get out there and leave it all out there.”