Constructions go forward while sports are on hold 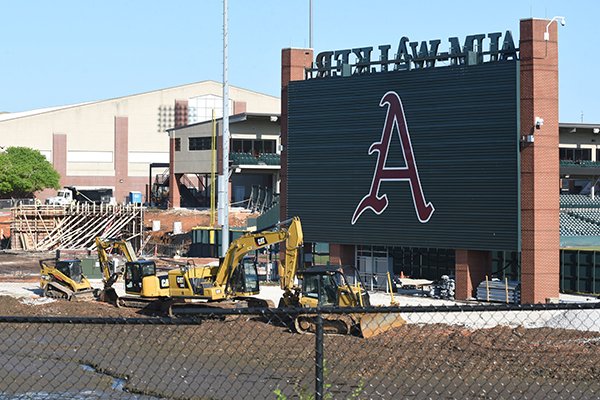 Construction crews work at the future site of the J.B. Hunt Family Baseball Performance Center on Wednesday, April 29, 2020, in Fayetteville.

FAYETTEVILLE — The sports shutdown that ended the seasons for 14 of the University of Arkansas’ 19 teams last month hasn’t stopped the Razorbacks’ construction plans.

Both buildings are expected to open sometime next year and will house new locker rooms, training areas and coaches’ office space, among other features.

The 45,000-square-foot baseball center is being built on the southwest side of Baum-Walker Stadium and will include new right-field seating options for Arkansas’ home baseball games.

The 22,000-square-foot track center is being built on the south side of the Razorbacks’ outdoor track stadium, McDonnell Field, to create a horseshoe configuration at the venue.

The UA is also in Phase I of renovating the Tyson Indoor Track Center, part of an estimated $19 million overhaul that eventually will remake the interior look of the building. The first phase of renovation will include the installation of a new track surface, new video board, new sound system, additional lighting and improvements to the HVAC units.

Phase I of the indoor track renovation will cost $5.1 million and is expected to be complete this summer, well in advance of when the UA is scheduled to host the 2021 NCAA Indoor Track & Field Championships next March. The timeline for future phases is to be determined, senior associate athletics director Matt Trantham said through a UA spokesman.

UA athletics director Hunter Yurachek said all three projects are expected to be completed on time.

“Right now each of the general contractors on those projects has a full workforce and those facilities are progressing on schedule,” Yurachek said.

Construction on the baseball center began in December, but work on the two track projects did not begin until after the SEC suspended all athletics competition March 12 due to the covid-19 outbreak. The UA moved forward on the the projects because all had been approved and bonds sold.

Yurachek said the economic downturn could affect the timing of future large-scale constructions or renovations. The UA recently completed a feasibility study for a major renovation of Bud Walton Arena.

“That was going to be three, four, five years out,” Yurachek said. “Whether that gets pushed out any further than that, I don’t know. But we’d started the feasibility study on that and that was kind of the next really major project we had on the books.”

Yurachek said he hopes to move forward on some “minor modifications” planned for soccer and softball locker rooms this year.

“Those are not major facility projects,” Yurachek said. “Those are things we can pay for out of some operational dollars.”