'Multiple' looks: Hogs not committing to base defense 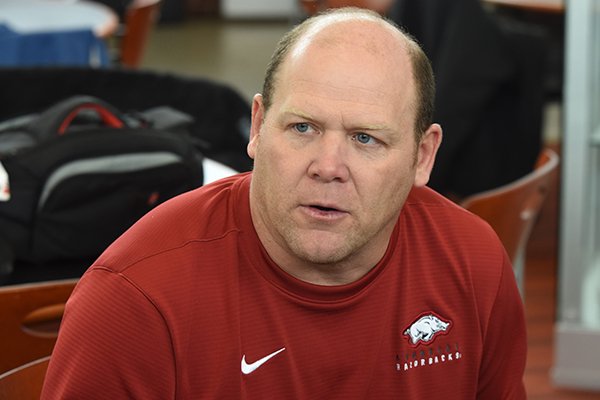 FAYETTEVILLE -- New University of Arkansas defensive coordinator Barry Odom has been around the block a time or two -- frequently on his daily walks with Coach Sam Pittman -- so he knows there isn't a simple answer to what defensive scheme the Razorbacks will base out of in 2020.

In multiple interviews since Odom came on board in December, the former Missouri head coach who played middle linebacker at Missouri and has been a position coach for both linebackers and safeties over the years, has talked about needing to employ various fronts.

"We're going to be really multiple," Odom said on a teleconference last week. "My history is more of a four-down front. There's times that we've got to find the right personnel and ... what that's going to look like schematically as we take some time through getting on the field."

When a reporter suggested Odom's remarks sounded like the Razorbacks would run a base 4-2-5 scheme, Odom responded, "I don't mean to be difficult, but we haven't practiced yet.

"So right now I just got off of a staff meeting defensively with our guys. We talked about really four different fronts, and so multiple would be [accurate]."

That's the rub with the Razorbacks. They have undergone no spring practices with the current staff. During the winter there was limited NCAA-allowed walk-throughs, for which the Razorbacks can thank their lucky stars, as those are a relatively new phenomenon.

"I like the new system," Pool said. "We're very multiple, and we're doing some things I really like. I kind of think that with any scheme, it's kind of about how hard you play. It doesn't matter what front it is, if you go out there and just bust it, you're going to be successful in it.

"I think we've got a lot of good parts around the linebackers and even inside the linebacker group that will make us a real dominant unit, so I'm excited to see what's in store."

Odom, Pittman and the defensive assistant coaches have studied the Razorbacks' returning personnel on that side of the ball, but until the veterans mesh with the newcomers and every player's physical status and conditioning levels can be measured, it's tough to predict which schemes will produce the best results.

Needless to say, the Razorbacks need to find difference-makers on all three levels after several seasons of ranking poorly among their SEC brethren. In addition to that, Arkansas lost one or two of its best players on every level of the defense from last year: McTelvin Agim and T.J. Smith up front; De'Jon Harris at linebacker; and Kam Curl at safety. Agim and Curl were selected by the Broncos and Redskins, respectively, in the NFL Draft, while Smith and Harris signed free agent deals with the Chargers and Patriots, respectively.

The good part for the Razorbacks during the lull in on-field activities due to the coronavirus pandemic, which robbed them of 15 spring practices, is that it has allowed the coaches to teach schemes and adjustments with much-needed repetition.

Odom and the other defensive coaches have supplied the players with tests on the formations, alignments and assignments, and they're able to go back over the material that trips players up with more frequency because the NCAA began allowing eight hours of "virtual learning" per week starting last week.

"We're installing a lot of different stuff right now," Odom said. "I think creatively you've got to be a great teacher, and you've got to put your kids in position to go play fast and play with confidence. And the overall structure on what that's going to look like, we'll be multiple."

Odom said during his time in Memphis, the Tigers were an "odd stack" team, leading to a 3-3-5 type of alignment.

Arkansas linebacker Grant Morgan, in an earlier teleconference, said the Razorbacks also could employ some 3-2-6 schemes with six defensive backs, including a nickel and a middle safety.

"There's things that we've got to do continually no matter what the depth chart looks like," Odom said. "It's putting the best 11 on the field to try to put us in position to allow them to play fast, understand the scheme and schematically what we're trying to get done but also give us the best chance about what we're facing offensively to try to defend the number of things that you see on a given Saturday and from week-to-week."

Pittman said the Razorbacks had solid depth with linebacker and strong safety body types, which will give Odom and the defensive staff some options with personnel use on the back end.

Pool, Morgan and Hayden Henry all have extensive playing experience at linebacker.

On the back end, Montaric Brown, Jarques McClellion and Greg Brooks are returning cover men, while junior Joe Foucha was a 12-game starter at free safety.

The defensive line was hit hard by losses, with end Gabe Richardson departing along with Agim and Smith. Mataio Soli, an 11-game starter at defensive end, is the lone returnee, though the senior he replaced, Dorian Gerald, is back after rehabbing from a injury to an artery in his neck.

Returning tackles such as Jonathan Marshall and Isaiah Nichols, and ends such as Zach Williams and Eric Gregory will be joining newcomers in a battle for playing time.

Odom has to see the personnel and schemes in action before deciding which fronts to utilize most.

"We've got a lot of things in," Odom said. "I don't know if I can sit here -- if we had to produce a depth chart today, then I'd probably give you two or three depending on what we're going to be running.

"I could give you 4-2-5 depth chart, I could give you a 4-3. The one I give you, if we don't run out there and play that the first snap then it looks like I wasn't telling the truth. We're going to be really multiple, and I've got to do a great job on finding the best way to get the best 11 on the field."