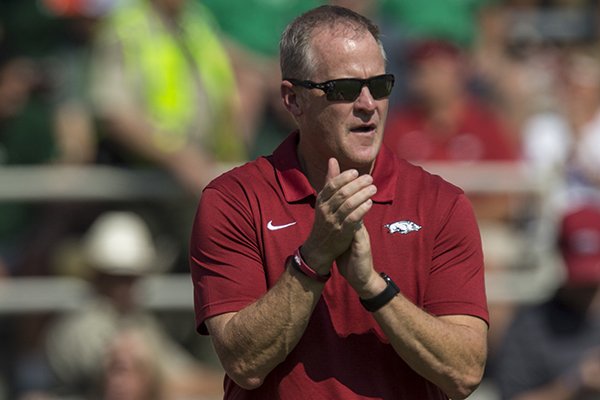 Arkansas athletics director Hunter Yurachek is shown during a football game between the Razorbacks and Colorado State on Saturday, Sept. 14, 2019, in Fayetteville.

FAYETTEVILLE — University of Arkansas athletics director Hunter Yurachek is in favor of a potential NCAA rule change that would allow players in the most high-profile sports to transfer once without penalty.

The NCAA Division I Council is expected to vote this month on whether to allow all scholarship athletes in football, men’s and women’s basketball, baseball and men’s ice hockey to transfer once without having to sit out a year, as NCAA rules currently read for those sports. Athletes in most other NCAA sports are immediately eligible following a transfer from their initial team.

Yurachek has said that he thinks the proposed one-time transfer exemption will pass, but it hit a potential snag Thursday when the 25-member NCAA Board of Governors recommended against the proposal. The 40-member Division I Council is expected to vote on the proposal May 20.

A working group of college administrators has recommended in favor of the one-time transfer exemption for the five sports, as have the Big Ten and ACC.

“I don’t know if that will be approved to go into effect for this year, but I think there’s been movement,” Yurachek said April 9. “What’s become very cumbersome is the waiver process for the NCAA and how certain waivers have some guidelines that are approved and how others are denied. I think the NCAA would like to get out of the waiver business and by having this one-year transfer exemption, it allows the NCAA to get out of that waiver business and kind of level that off a little bit. I think that’s the right thing to do for our student-athletes.”

Jake Yurachek transferred following a head coaching change at the end of his freshman season. Because he was a non-scholarship athlete at Colorado, Yurachek was eligible to play for the Razorbacks last fall, but his father said his situation is one faced by many athletes.

“He made a pretty quick decision to go to the University of Colorado to play football and it was not a great fit for him, and not a great fit for him as he went through a coaching change,” Hunter Yurachek said last week. “He had an opportunity to come to Arkansas…and it’s been the best thing for him and his career, his personal life and his academic setting.

Vanover, a Little Rock native who transferred to Arkansas following a coaching change at California, was not able to play in his first year after a transfer because he was on scholarship.

“He was committed to Memphis (in high school), but they had a coaching change and he lost his scholarship to Memphis, and had to make a very late decision to go to Cal-Berkeley,” Yurachek said. “He was homesick and wanted to have an opportunity to return home and come to Arkansas. To me, that’s a very valid reason, yet he was denied a waiver.

“Then you might have another student-athlete who might have been dismissed from a team, but puts in a waiver saying he was run off and then he’s immediately eligible. That waiver process has made this very convoluted, and I think the only way to make it fair across all sports is for there to be a one-time transfer exemption.”

Arkansas basketball coach Eric Musselman was asked about the potential transfer exemption on April 20. Musselman said he wanted to wait to comment until there was clarity on the vote, but added, “I do think that anytime with anything that we can give the student-athletes something, it is all about them, whatever helps them have the four best or two best or three years - however long they are in college - the very best lifetime experience, I am all for it.”

Yurachek referenced the ability for coaches to change jobs in his support of the one-time transfer vote.