UA football target pushes on after loss of parents 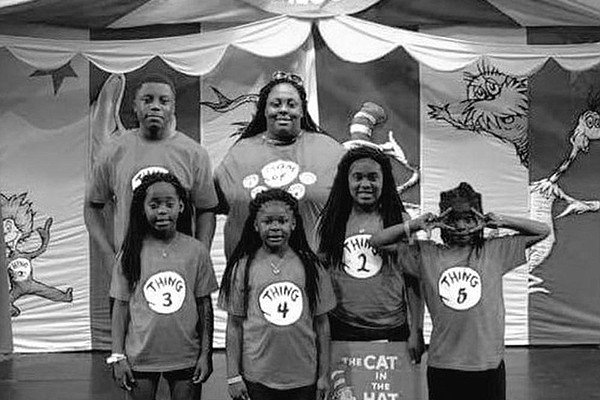 Jerrell Boykins Jr. (top left), a University of Arkansas defensive line target, is shown with his mother (top right) and four siblings when he was 14. Boykins has had to grow up fast after losing his father when he was 5 and his mother when he was 15. “I’ve learned to take care of myself, and I don’t have to depend on anyone if I don’t need to,” he said. (Photo courtesy of the Boykins family)

Jerrell Boykins Jr. has had to overcome unimaginable adversity in his short 17 years.

When Boykins was 5, his father died of a rare liver disease at the age of 25. His mother, Demetria Smith, died in her sleep of a heart attack when he was 15.

"It was hard. I cried for close to two years straight," Boykins said of his father's passing. "I didn't know what to do, and my mom tried her hardest to explain to me about what was going on."

A University of Arkansas defensive line target, Boykins is a senior at East Ascension High School in Gonzales, La.

"Doctors gave my dad three months to live when I was born, and he stayed on and lived another five years," Boykins said. "I didn't find out until later in life, but he defied odds for five years straight and enduring the daily pain just to see me grow for a little while."

Boykins' youth helped shield him from his father's illness.

His parents were separated when Boykins was about a year old.

Despite his workload, Boykins' father was very active in his son's life and emphasized family.

"I learned that because of what he did with me," Boykins said. "Knowing he worked two jobs and he still found time every day to come and see me for at least an hour to two hours. That alone was crazy to me with everything he was dealing with."

Boykins is a very proud "junior" and makes note of it every chance he gets.

"I make sure I put junior on everything," he said. "It's on my credit card, my debit card. When I put my name on anything, I put Jr. My mom emphasized that to me when I was around 11 that I am his son. I realized I wanted to live up to that name."

His mother raised him and his four siblings Talaijah, 14; Taylor, 12; and 11-year-old twins Jaylen and Jayla on her lone salary. Finances were often tight, and some bills were delayed in being paid.

"She tried her best to hide all the financial problems from my siblings and me," Boykins said. "As I got older, I figured it out on my own. She couldn't hide it from me anymore."

His mother moved the family to Texas after his eighth grade year. He played his freshman season at Paetow High School in Katy.

Boykins' talent on the football field was blossoming and motivated him into thinking he could help make his mother's life easier one day.

"I felt like if I could do something with myself in college or even make it to the NFL and get her a house and make it where she didn't have to worry about anything in life again, at least money-wise, I would feel great," Boykins said.

His mother traveled back to Louisiana two years ago to visit an uncle who was expecting the birth of his child.

Struggling with the immense pain, he heard his mother's voice about a month after her death.

After his mother's death, he and his siblings moved back to Louisiana. Boykins lives with an aunt while his siblings live with their grandmother.

Boykins credits his football Coach Darnell Lee with helping him through his grief.

"He asked me, 'How are you dealing with this?' " Boykins said. "He asked everything. He asked football questions dead last. He figured me out as a person first, so knowing that I had someone like that coaching me and having my best interest at heart, that right there was a big plus."

With the help of his coaches, family and teammates, Boykins has been able to cope with the loss of his mother.

"My teammates, every time I would break down they are there," Boykins said. "They barely knew me at the time, but they are still there for me when I would cry."

Losing both parents forced him to grow up fast.

"I've learned to take care of myself, and I don't have to depend on anyone if I don't need to," Boykins said. "I know when to say when I need help, but when push comes to shove, I can survive on my own."

His mother's strength and determination provided Boykins with the utmost respect for women and single moms.

"Women do things that I never thought were possible," Boykins said. "They go through stuff alone sometimes and get through it like it's nothing.